JUST IN: Putin’s Aide Walks Out On UK During UN Security Council Meeting On Ukraine 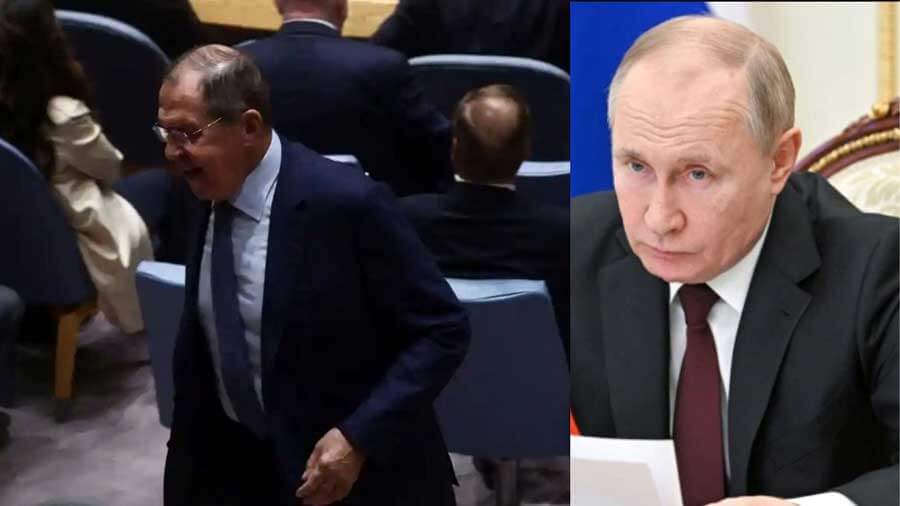 On Thursday, the Minister of Foreign Affairs of Russia, Sergey Lavrov, walked out while James Cleverly, Foreign Secretary of the United Kingdom, was addressing the United Nations Security Council on the 8 months’ ongoing Russian war in Ukraine.

The Security Council, which is the apex body of the UN, sat on the sidelines of the 77th General Debate to speak and vote on the war in Ukraine which began in February 2022.

When Cleverly was asked to speak on Ukraine, he spoke for a while and started looking sideways, complaining that his Russian counterpart had left the room without hearing his account or waiting till the end of the council meeting.

“He’s left the chamber! I am not surprised, I don’t think Mr Lavrov want to hear the collective condemnation of this Council,” Cleverly said in the meeting monitored by our correspondent.

Continuing, he accused the Russian government of inflicting an untold humanitarian crisis in Ukraine.

“We have information that Russia is about to hold a sham referendum in Ukraine with no basis in law,” he said, adding that Russian President Vladimir Putin is planning to use that to annex Ukraine.

Earlier, Lavrov insisted that impunity reflects what has been going on in Ukraine since 2014 with direct support from Western Countries led by the United States.

“For over eight years, the Ukrainian fighters have killed the inhabitants of Donbas,” he said, alleging that Ukraine has been punishing Russian-speaking citizens in a bid to oust the Russian language.

He insisted that the West see Ukraine as a ground for attacking Russia adding “I can assure you that we will never accept this.”

“We have no confidence in the work of the International Criminal Court,” Lavrov said.

On his part, the US Secretary of State, Antony Blinken told all diplomatic officials that the capital reason his country is supplying weapons to Ukraine is because, without self-defense, Russia would destroy it.

“One man chose this war; one man can end it. If Russia stops fighting the war ends, if Ukraine stops fighting, Ukraine ends. Tell Putin to stop the horror that he started, tell him to stop debasing this council,” he said.

“We must stick to dialogue and negotiation, we must walk together for de-escalation, we must ease the humanitarian situation, minimizing casualties while an investigation into the war must be objective,” he said.

The fourth solution he suggested was for all parties to allow energy and grain export from Ukraine and Russia to other countries of the world.

After the council member’s discussion, permanent and non-permanent members would vote on the next line of action regarding Ukraine.

Russia, US, China, UK are permanent members of the UN Security Council and they have veto power which empowers any of them to block a majority decision of the council.

‘I Was Obeying Orders’ – Russian Soldier Pleads Guilty To Killing…