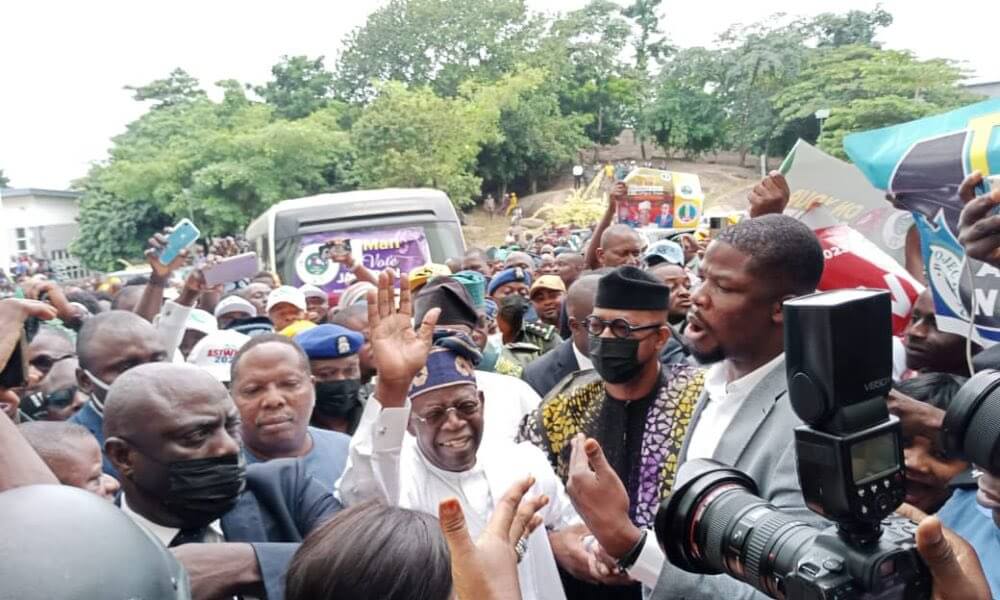 The presidential candidate of the All Progressives Congress (APC), Bola Ahmed Tinubu, is currently meeting with former President Olusegun Obasanjo at his residence in Abeokuta, Ogun State.

Tinubu landed at the Olusegun Obasanjo Presidential Library (OOPL), Oke Mosan, Abeokuta around 1pm on Wednesday to continue his consultations to actualize his presidential bid.

The APC candidate was received by Governor Dapo Abiodun, his Deputy, Noimot Salako-Oyedele and former governors Olusegun Osoba, Gbenga Daniel and other APC bigwigs, who were already on the ground.

Tinubu was accompanied by House of Representatives Speaker, Femi Gbajabiamila and other APC chieftains including Chief Bisi Akande, Nuhu Ribadu, among others.

It is the first time the pair would be having a public one-on-one meeting since their stand-off when Obasanjo was president and Tinubu was Governor of Lagos State. However, THE WHISTLER reports that the APC candidate had met Obasanjo in the lead up to the 2015 presidential election alongside the party’s candidate and current president, Muhammadu Buhari.

Obasanjo had also met with the presidential candidate of the Labour Party, Peter Obi, when he was an aspirant on the platform of the Peoples Democratic Party, PDP.

The meeting, which is ongoing has no reported agenda, however, the Chief Press Secretary to Governor Dapo Abiodun, Kunle Somorin, dropped the hint earlier in the day saying, that “I Learnt that the Presidential Candidate of the All Progressives Congress (APC), Asiwaju Bola Ahmed Tinubu will be visiting Abeokuta, Ogun State today, Wednesday, August 17, 2022.

“He’s scheduled to visit President Olusegun Obasanjo at 10.00 am and address the people at the MKO Abiola Int’l Stadium immediately after,” Somorin said in a terse statement made available to newsmen.

Another statement signed by the APC State Chairman, Yemi Sanusi, said, “All Exco members and Party Chairmen are to attend promptly.

“Asiwaju Visits Ogun State: This is to inform you that the Presidential Candidate of the All Progressives Congress (APC), Asiwaju Bola Ahmed Tinubu will be visiting Abeokuta, Ogun State today, Wednesday, August 17, 2022.

“All Exco members and Party Chairmen are to attend promptly. Time: 10.00 am,” it reads.

Those Behind ‘Malicious Falsehood ‘ On Tinubu Will Face God’s…