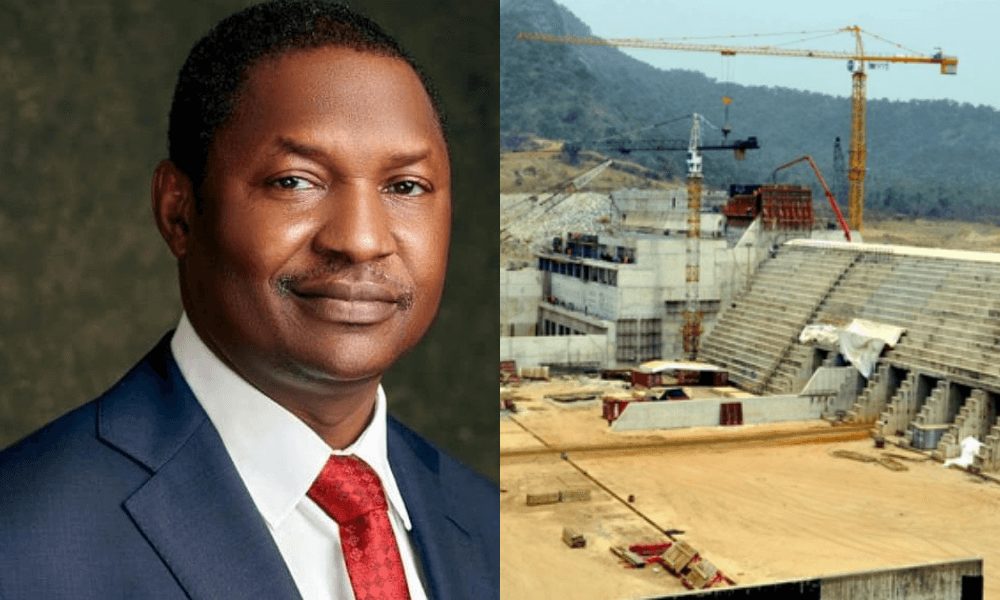 The Minister of Justice and Attorney General of the Federation, Abubakar Malami, has said that Sunrise Power Transmission Company of Nigeria Ltd (SPTCL) has withdrawn its case against the Federal Government opening the way for the commencement of the Mambilla Power Project.

Malami disclosed on Thursday in an interview on Arise TV monitored by THE WHISTLER.

He said that the case has ended, opening the coast for other investors to take up the hydro power project.

The Federal Government had in 2003 signed a contract to construct the Taraba-based Mambilla Power Project with Sunrise Power and Transmission Company Limited on a Build, Operate and Transfer, BOT, arrangement.

The FG afterwards awarded the Civil Works component of the Mambilla Project to a consortium of Chinese companies, led by China Gezhouba Group.

Consequently, Sunrise sued the Federal Republic of Nigeria and and Sinohydro Corporation Limited at the International Court of Arbitration (ICA) in Paris, France for contract breach

Sunrise sought before the court a compensation of $960m for the breach.

The project which was awarded to the company in Taraba State was expected to be Nigeria’s biggest plant with 3,050 megawatts. But the litigation had stalled the project for years.

The Attorney General said, “For the Sunrise, perhaps one good information or perhaps that calls for celebration that I wish to present for your consideration is the fact that Sunrise has indeed withdrawn its pending arbitral proceedings in respect of which it was claiming against the interest of the Federal Government for an amount within the region of around $1bn.

“So as it is, the only impediment to Mambilla Project which had been the pending litigation that constituted an impediment that stopped the investors from investing in Mambilla has been effectively displaced with the withdrawal or discontinuation of the arbitral proceeding by Sunrise.

“So, the information that calls for celebration is the fact that there is no any pending impediment relating to the Mambilla project with the discontinuation of the Sunrise proceeding in Paris.”

The $200m was reached after negotiation by both parties in London.

Part of the settlement reads, “Under the above Request for Arbitration, Sunrise Power and Transmission Company Limited claimed damages amounting to not less than US$960,000.00 as a consequence of Respondents’ breach of the General Project Execution Agreement (GPEA).

“Desirous of removing all legal impediments to the execution of the Mambilla Hydro-Electric Power Project, the Federal Republic of Nigeria and Sunrise Power and Transmission Company Limited have mutually agreed to settle the dispute in this arbitration amicably.

“The Federal Republic of Nigeria shall, within a period of 14 days from the date of these Terms of this Settlement, pay Sunrise Power and Transmission Company Limited the sum of US$200,000,000.00 in full and final settlement of the claims in this arbitration.

“Sunrise Power and Transmission Company Limited shall take immediate steps to provide a Deed of Acceptance of the above sum and also provide Deed of Undertaking to withdraw all its legal and equitable interests in the Mambilla Hydro-Electric Power Project and shall drop all its claims against the Federal Republic of Nigeria and all other parties associated with the Project.

“The terms of settlement thereof shall be entered as the Final Consent Award of this Honourable tribunal in these arbitration proceedings.”

BREAKING: I Won’t Fold My Arms And Watch Governors Transfer Their Debts To FG – Malami

Stolen Funds From Nigeria, Others Should Be Returned With Interest – ICPC Chairman