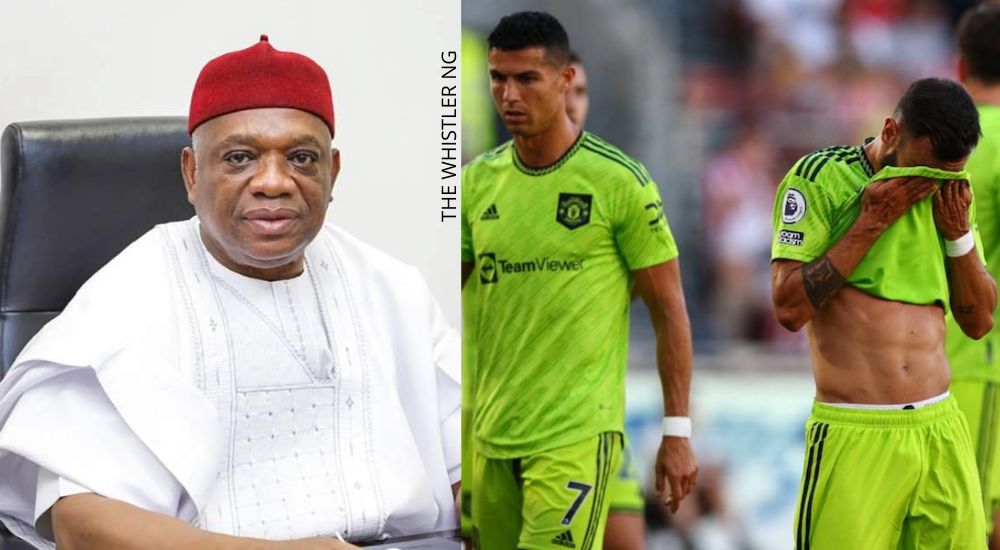 Orji Uzor Kalu, the Senator representing Abia North, was unable to sleep after a Facebook post he made about Manchester United’s 4-0 defeat by Brantford on Saturday attracted negative comments from some of his followers.

Kalu, at about 3am on Sunday, recorded and shared a video on the social networking site where he complained bitterly about youths “abusing a statesman like me” when they ought to be learning from him.

Manchester United had suffered the defeat by Brentford at the Gtech Community Stadium, making it the English club’s second loss in the new Premier League season.

Kalu in reaction made a Facebook post about how it was “the first time in 84 years” that Manchester United would suffer “a heavy defeat to Brentford.”

The Senator and two-time former governor of Abia State added, “Definitely not a good time for Man U and its fans, I hope they get back on track and on time as one can only imagine what will happen when they face Liverpool next week.Huge win and Great performance from the Bees!!!”.

But some of the lawmaker’s followers took to his comment section to wish that he and his party, the All Progressives Congress (APC), would suffer similar defeats in their political outings in the 2023 general election.

Another user said instead of devoting time to talking and finding solutions to the myriad of challenges facing the country, the Senator was discussing “Man United game, defeat and shame.”

Kalu, in a subsequent post he shared at about 4:30 am on Sunday, said he was worried about the attitude of Nigerian youths toward their elders.

“I feel disturbed the way Nigerian youths (behave). Instead of them to face what the business is all about, they are facing what is not the business,” the Abia Senator complained.

“When we discuss Man United, they should be able to reply to Man United, not abusing a statesman like me that this is how your party will end. We should learn, education is on Facebook, Facebook is not for abuse.

“You don’t insult your elders and become successful. I don’t want to curse anybody in Nigeria because I didn’t behave like this as a youth.

“I’m 62 years old. When I was 25 I was already very successful. So, if I see youths who should chat with a statesman like me so that they will have a lot of ideas to do something with and they are joking with it…It is not fair on me, neither is it fair on most of the civilized youths.”

Kalu advised that youths should shun the urge to attack politicians like him who take out time to engage with them on social media and instead seek to learn from their experiences.

“We should outgrow this behaviour and be able to learn from each other. We need one another and we must learn. I spend my time to chat…to come to Facebook. It’s not how our youths should behave. We must be attentive and proactive and discuss issues, not people.

“How can we teach, how can you learn when you abuse everybody? Ask some of the youths on that Facebook, they’ve learnt a lot from me and I’ve learnt a lot from them. It is a partnership we must establish to be able to discuss freely. I don’t encourage how you people are abusing people on Facebook.

“I’ve replied to a few people who said are you a Man U fan and I said no, I only support good football. The only team I’ve had in my life is Enyimba. I enjoy the premiership, I enjoy La Liga, I enjoy the Italian league, I enjoy the German league and all the leagues but I don’t have a team, I don’t want to break my heart or not eat my food like most of you.