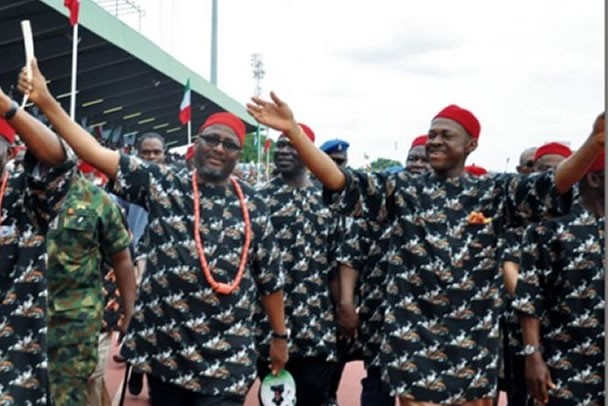 THEIR countenance was business like, an indication of the critical nature of what they had converged for.

Indeed,  an issue of uttermost significance could attract such eminent Nigerians of Igbo extraction.

From Abuja, Enugu, Owerri, Umuahia, Awka, Abakiliki and other parts of the country, they met in Lagos to deliberate on issues affecting the South-East in the light of the o-ngoing street protests by youths in the geo-political zone.

Sunday Vanguard understood that the gathering was at the instance of Ekweremadu under the auspices of Concerned Igbo Elders, Traditional Rulers and Stakeholders.

Instructively, the convergence was the first of its kind since the commencement of the reverberating protests by youths demanding for the sovereign state of Biafra.

The forum was particularly distinguished by the fact that it was of a melting point for every class of the Igbo race, as evidenced by the presence of serving and past government officials, traditional rulers, the clergy, academicians and traders among others.

At the event, chaired by Ukiwe, speakers mirrored the protests within the context of the place of the Igbo in the present dispensation and submitted that the underlying issues are beyond the assumed reasons for the unrest.

Blending the realities on ground with historical instances, they were unanimous in the argument that the South-East has been deliberately relegated out of prominence in the country’s political configuration.

This situation, to them, contravenes all known principles and norms of federalism which the country practices.

With certitude, the speakers dismissed the widely held assumptions that the protests were provoked by the collapsed and inadequate infrastructure in the region.

The outrage, they enthused, is nothing but the outward expression of the psychological and physical pain arising from the current exclusion of the South-East from the governance of Nigeria.

Sunday Vanguard also learnt, from the uniformity of the   contributions to the interaction, that the Ndigbo feel alienated by the distribution of political offices in a manner widely seen as unequal.

Of note, in their reckoning, are key ministerial, security and statutory positions, among others.

A communique, issued at the gathering, further elucidates the posture of Ndigbo.

It read: ‘’This meeting was convened at the instance of the Deputy Senate President, Sen Ike Ekweremadu. The meeting was of the view that Ndigbo are dissatisfied with their current position in Nigeria. The meeting noted that Nigeria is a negotiated federation of three regions in 1960. And our fore fathers played a major role in bringing it to be.

‘’In the First Republic all constituent regions had their separate constitutions and had a say in the exercise of central power in Nigeria. Ditto in the Second Republic with federating units. In the Third Republic, even when the Alliance for Democracy,AD, dominated in the South-West, the then President Olusegun Obasanjo of the PDP made deliberate efforts to bring in AD. That was statesmanship. That was nation building.

‘’It is not in doubt that Ndigbo are nation builders, found all over Nigeria, earning their living and helping to develop the communities in which they are domiciled. Ndigbo do not have an empire mentality and do not wish to dominate any other and would not want to be dominated either.

‘’Ndigbo would never accept to be second class citizens in a country in which their fore fathers laboured along with others to bring into being and to develop. Ndigbo would never be tired of and protesting against injustice and inequity in Nigeria. For as Elie Diesel said ‘’There may be a time when we are powerless to prevent injustice, but there must never be a time when we fail to protest against injustice.’’

Street protests by the youths

‘’Ndigbo have reviewed the ongoing street and public protests by the youths calling for Biafra and are of the considered opinion that these are outward expressions of the psychological and physical pain arising from the current exclusion of the South East geo-political zone from the governance of the country and this should be addressed and redressed.

‘’Consequently, Ndigbo strongly recommend that dialogue be embraced in order to remedy the situation. All public protests should be stopped. And more importantly the public protests should not be exported. Ndigbo are deeply saddened by the loss of lives arising from the protest. Enough Igbo blood have been spilled in Nigeria.

‘’To facilitate the immediate initiation of dialogue to remedy the current intolerable Igbo situation in Nigeria, we reiterate the advise given to the Federal Government by Ohaneze Ndigbo to treat the continued detention of Mr. Nnamdi Kanu as a political matter rather than criminal issue. We understand that the courts ordered his release. We urge the Federal Government to abide by the rule of law.

‘’Ndigbo participated actively with other Nigerians at the 2014 National Conference. We see the report of that conference as a veritable document to anchor the proposed dialogue towards the restoration of Nigeria to true federalism which our founding fathers negotiated prior to independence in 1960.

‘’Ndigbo stand firmly on the implementation of the key recommendations of that conference. The meeting stands for, believes in and supports the unity of Nigeria founded on justice and equity.’’

However, moved by the impressive turnout and the ability to have a common voice on the development, Nwabueze called for the sustainance of such oneness on issues pertaining the zone.

‘’The success of this gathering should not end here. We need to sustain it. First thing is to formalize this initiative. We must also have a group to talk with our governors not only on the Biafran issue but others.’’