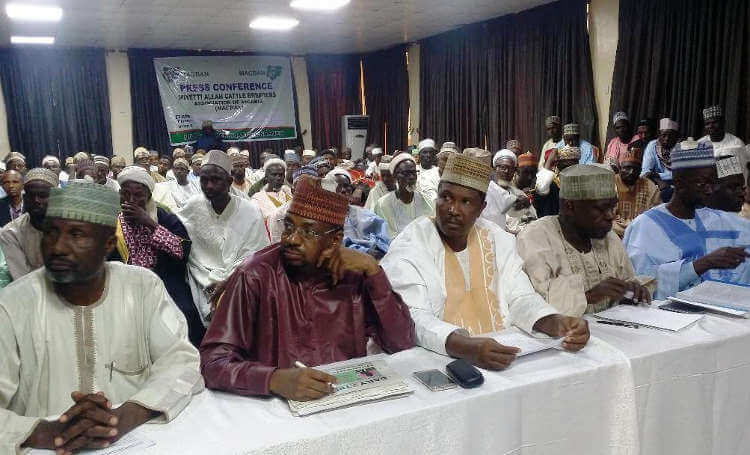 The apex Fulani socio-cultural organisation, Miyetti Allah Kautal Hore, has revealed those who sponsored the killings in Plateau state.

Recall that the attack on Razat, Ruku, Nyarr, Kura and Gana-Ropp villages of Gashish District in Barkin Ladi Local Government Area of Plateau State, which claimed no fewer than 100 lives, was in retaliation to the killing of over 300 cows according to Danladi Ciroma, Miyetti Allah Cattle Breeders’ Association, MACBAN Chairman, North Central zone.

The group, in a statement by its Secretary-General, Saleh Al-Hassan, insisted that politicians who are facing corruption charges were behind the Plateau massacre.

At a colloquium tagged “Understanding democracy as instrument of development, integration and national cohesion,” organised by the Citizens Communication and Advocacy Centre, Al-Hassan said, “The spate of insecurity in this country is worrisome to anybody that loves this country and I think our security agencies should be up and doing.

“We must watch closely our politicians, their utterances and their body language because some of them are the ones promoting violence we are having in this country.

“We are not responsible for the killings in Plateau State. There are crises between farmers and herders all over the country, particularly in the North -Central geopolitical zone. We must recognise that it is a crisis that borders on land resources and we are calling on the government to put mechanisms in place for sustainable management of the land resources.

“But first, our security agencies must be supported to identify the perpetrators and the promoters of this violence.

“We must closely monitor some of these evangelicals that preach hatred in churches and mosques and desperate politicians that are facing corruption charges. We must be able to get all of them and watch them closely so that they don’t set this country ablaze. They are the drivers of the conflict.

“Most of these politicians own armed thugs and militias across the state. The government should also find those behind the importation of large arms into the country. Who are the people importing these arms?”