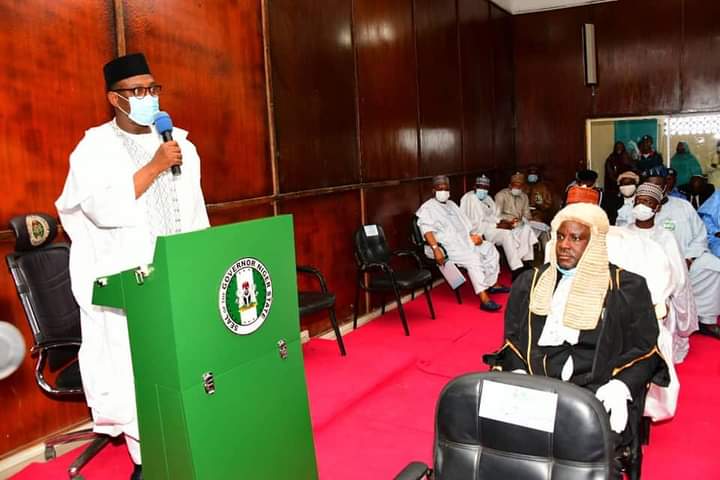 Niger State Governor, Abubakar Sani Bello, has said his administration is committed to granting full financial autonomy to the judiciary.

Bello disclosed this during the valedictory court session for retired Justice Aliyu Mohammad Mayaki and the swearing-in of Justice Aisha Lami Bwari as the Acting Chief Judge (CJ) of the state held at the High Court in Minna.

Chief Press Secretary to the governor, Mary Noel-Berje, said on Friday that Bello gave an assurance that his administration was ready to give the judiciary full autonomy.

He explained that this would be as soon as the modalities for granting autonomy were worked out.

Noel-Berje noted that her principal assured the acting CJ, Justice Bwari, of his administration’s continued support to the judiciary to ensure her success.

The Chief Press Secretary said, “He said the welfare of the judiciary and good working environment of the staff will continue to remain a priority even as it has since commenced the renovation works in many of the Magistrates and Sharia Courts, maintaining that it will be sustained.

“The governor who said he is committed to making the Judiciary function efficiently and effectively decried over the level of delapidation of courts facilities especially at the rural areas calling on all concerned to take necessary action to change the narrative.

“He appreciated Justice Mayaki for his meritorious service to the state as CJ, having brought in his wealth of experience to bear, urging him to avail himself whenever the State requires his services.”

Also speaking after her swearing-in, the acting CJ, Justice Aisha, who until now, was a high court judge said that her leadership will focus on infrastructure development especially through the utilization of vast land in the judiciary complex to provide more office accommodation.

She maintained that infrastructure is key in ensuring quick dispensation of justice.

In his remarks, the retired CJ, Justice Mayaki appreciated the cordial relationship and the support accorded him by the state government and other legal practitioners, saying that such contributed to the success of his tenure.

Malami Urges Judiciary To Open Up For Public Scrutiny