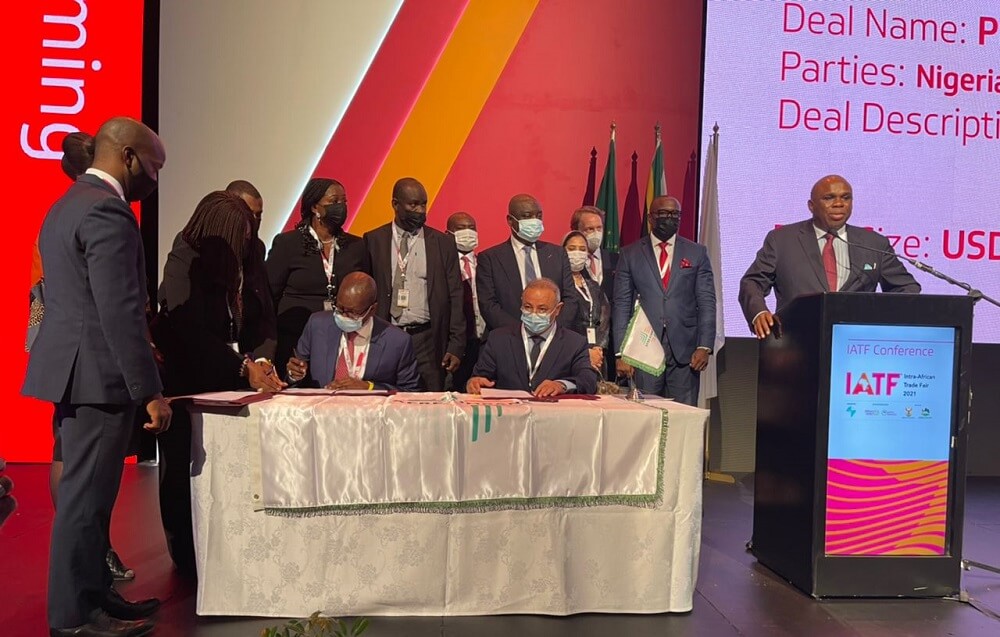 The second Intra-African Trade Fair (IATF 2021) generated a record setting $42.1bn in trade and trade-related investment deals, according to the latest tally released on Monday by the IATF Advisory Council.

Organised by African Export-Import Bank (Afreximbank), the African Union (AU) and the African Continental Free Trade Area (AfCFTA) Secretariat, IATF 2021 saw $42.1bn worth of trade and investment deals agreed during the event, which took place from 15 to 21 November in Durban, KwaZulu-Natal, South Africa.

IATF 2021 thus surpassed its pre-set target of $40bn in trade and investment deals, going well beyond the $32bn in transactions closed at the first edition in Cairo, Egypt in 2018.

The expected number of participants and exhibitors were also exceeded.

This bring the total number of participants to around 39,000 from 128 countries around the world.

Opened on 15 November at a ceremony attended by seven African Heads of State and Government, IATF 2021 was also marked by several major innovations

Some of these major innovations are the first African Sub-Sovereign Governments Conference held on 18 November, on the sidelines of the trade fair, as well as the first ever African Auto Show and Auto Forum.

Nigeria’s former President Olusegun Obasanjo, who is the Chairman of the IATF 2021 Advisory Council and former President of Nigeria, commended the outstanding performance while congratulating the organisers and the host country for their tenacity.

“Despite the uncertain environment arising from the COVID-19 pandemic situation, IATF 2021 attracted exhibitors from 59 countries, of which 46 were African countries.

Buyers, sellers and investors came physically and virtually from across Africa and beyond to connect and exchange trade, investment and market information.

“We have effectively begun the process of building bridges for a successful AfCFTA, less than a year after the commencement of trade under this agreement.

“We congratulate the Government of the Republic of South Africa and the KwaZulu-Natal Provincial Government, Afreximbank, the AU Commission and the AfCFTA Secretariat, and thank them for the swift efforts made in record time to organise this historic event, which has resulted in the resounding success that we see today,” said Chief Obasanjo.

Commenting on the results, Professor Benedict Oramah, President and Chairman of the Board of Directors of Afreximbank, said that the success of IATF 2021 is proof that intra-African trade is taking root under the platform of the AFCFTA.

“We are proud to be well on the way to consolidating an initiative that is already beginning to transform intra-African trade.

“IATF 2021 was enormously successful at all levels. The $42.1bn in trade and investment deals that were generated reflected the record participation, a well-thought-out platform, diversity and depth of goods and services showcased and a rich programme.

“We thank the African Union Commission and the AfCFTA Secretariat, the Government of the Republic of South Africa and the KwaZulu-Natal Provincial Government as well as our other partner institutions, donors, exhibitors, buyers and performers for their strong collaboration,” said Prof. Oramah.

Ambassador Albert Muchanga, AU Commissioner for Economic Development, Trade, Industry and Mining, said: “IATF2021 was held under very challenging circumstances, but with the hard work and commitment from all the stakeholders, it turned out to be a huge success not only for the big business but also for the young people who participated in the IATF under the AU Youth Start-Up Programme.

“The IATF also plays a vital role in catalysing industrialisation and production of manufactured and value-added goods and services in support of regional economic integration objectives under the AU Agenda 2063.”

“The conclusion of trade and investment deals worth $42.1bn demonstrates that there is a huge opportunity for boosting intra-African trade if all the key stakeholders work together.”

We Don’t Need An Oracle To Tell Our Leaders To Stop Exporting Raw Cocoa, Rubber…

Nigeria Gets $400,000 Grant From Afreximbank To Boost Pharmaceutical Production