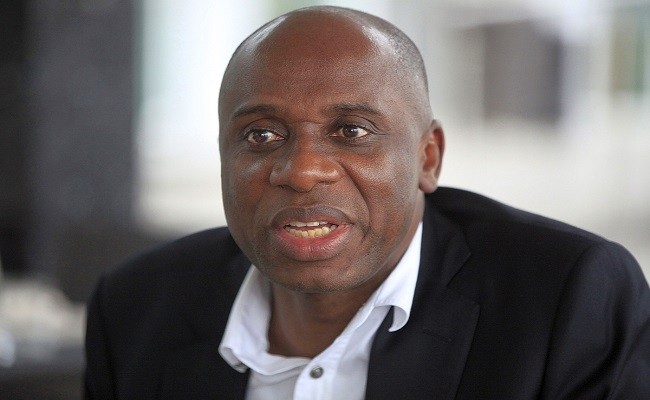 Following the inauguration of ministers with portfolios on Wednesday by President Muhammadu Buhari, Nigerians have taken to twitter to express their opinions especially on new Minister of Transport, Mr. Rotimi Amaechi.

Chris Collions tweeting from Am a champion @chrisrexcollins said, ‘APC official driver now promoted as national driver…..transport minister,’ while Karo Orovboni tweeted from @KaroOrovboni that ‘As Amaechi is the Minister of Transportation, will he monitor the Edo people that fly too? That’s a form of transport, no?’

Chucks Cosmos @bobkingsley93 Minister of transport to amaechi must be his worst night mare ever.

On the other hand, Nnaemeka Ezeribe @utuakpa apparently in reference to Amaechi’s demeanour as he left the inauguration hall with hands behind his back and unsmiling face, tweeted, ‘Dude, calm down, Transport is ‘juicy’ too!’

But few others had kind words about him like Emekafunny @EMEKAFUNNY who said, ‘Rotimi #Amaechi is the minister of transport.So if you be Ikwerre man way dey come from village to town,transportation na free.’