North Kicks Against South’s Position On Restructuring Of Nigeria 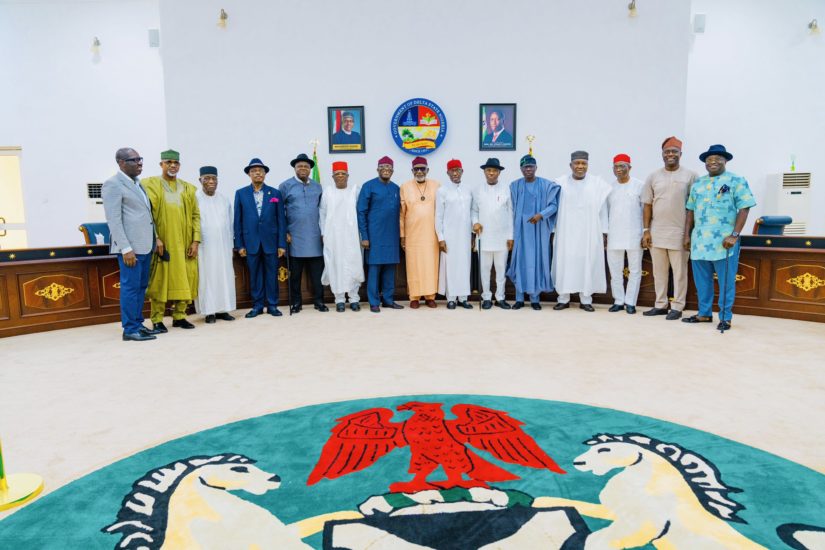 The Arewa Consultative Forum (ACF), the apex socio-cultural organization for Northern Nigeria, has kicked against calls by senators and governors from the South, for restructuring of the country, state police and ban on open grazing.

The ACF through its National publicity Secretary, Emmanuel Yawe, on Wednesday faulted the 12-point communique issued by governors from the South.

According to Yawe, “the ACF believes that before we take a decision on restructuring, we should agree on whether Nigeria should remain country before deciding on what.”

He added that “our position on this is informed by the fact that some of the advocates of restructuring are at the same time advocating for the dissolution of Nigeria. Are they believers in Nigeria at all? We must all agree to let Nigeria be, before we move forward.”

ACF however agreed that Buhari should address the country, even as it revealed that the Miyetti Allah Cattle Breeders Association of Nigeria has called for the creation of cattle ranches as part of the solution to farmers-herders crises.

In his reaction, the former Executive Secretary of the national Health Insurance Scheme (NHIS), Prof Usman Yusuf, said the Southern governors and federal Senators from the region should provide land for Fulani herdsmen before asking for a ban on open grazing.

Insisting that the South did not consult Fulani before arriving at the decision, Yusuf said, southern governors must provide land for Fulani bandits to graze their cattle if they want to ban open grazing. Gathering in one hotel and giving a blanket ban is irresponsible.”

Meanwhile, the Pan-Fulani group, Miyetti Allah Cattle Breeders Association of Nigeria (MACBAN) has joined the Southern Senators Forum to demand for a national dialogue to resolve the prevailing security situation in the country.

The group asked President Muhammadu Buhari to quickly convene a national dialogue to save the country from sliding into anarchy.

This is as it disclosed that the situation is a grave concern, and requires that Nigerians come together and express themselves on the way forward for the country.

The National Coordinator of MACBAN, Garus Gololo, who spoke to THE WHISTLER also queried why the President has refused to address the nation so as calm growing agitations for secession.

The group’s position is coming at a time when governors and senators from the South have called on President Buhari to convene a national dialogue with a view to finding lasting solution to the situation in Nigeria.

The lawmakers had, arising from a meeting held in Asaba, the Delta State capital, asked Mr Buhari to among others, address the nation on the rampant killings in parts of the country.

They also demanded a ban on open grazing, restructuring of the polity, state police and constitution review.

Earlier on Tuesday, Governors from the South had after a four-hour meeting in Asaba agreed on a ban on Open grazing, stating that the practice is responsible for farmer-herders clashes that have claimed lives, leaving untold hardship in its trail.

In a related development, a pan-Yoruba socio-political group, Coalition of Oodua Self Determination Group (COSEG), on Thursday supported two of the resolutions reached by the Southern Governors Forum (SGF), banning open grazing and supporting restructuring of the country.

A statement by the group’s Chairman, Comrade Dayo Ogunlana, described the resolution on open grazing as the right step in the right direction, saying that only such move will prevent the frequent unnecessary squabbles between herders and farmers.

According to the group, “We support in entirety the call by the Southern Governors calling for restructuring, as we have always demanded for this as the only way that Nigeria project could be saved.

“The anomalies and the lacuna in the present system are just too much and this has really eaten deep into the basis of our existence as a country. Our people and the southwest part of Nigeria are deeply affected by this awkward and heavily skewed system that has impoverished our people, race and southwest region.

“The welfare of our people are in the low and as such strengthens the Yoruba people to always seek to leave Nigeria for Oodua Republic. We must state it clearly that genuine and sincere restructuring without any condition attached will bring back a virile, united, peaceful and prosperous country envisaged by Nigeria founding fathers.

“Anything short of this is a doom for Nigeria. We therefore hail the Southern Governors for supporting this continuous call by us though late, but as people say its better late than never.”

The group noted that open grazing falls short of global practises and decency, adding that it’s a wicked, inhuman and indecent method of rearing animals to the detriment of other farming practices.

“Why will one continue to destroy crops of others and even other people’s properties in the pretence of rearing cattles? Will this not be a basis for disharmony and battles? It must be stopped forthwith.

“Whoever still supporting this crude manner or barbaric method of rearing animals is anti- Nigeria. It’s that simple,” the statement read in part.

COSEG lambasted the Arewa Consultative Forum (ACF) for what it called “their odd position on restructuring” and thereby advised the forum to see restructuring as the only way out of the present quagmire.

“We are disappointed with Arewa Consultative Forum who has always pretended to be an advocate of a United Nigeria. We sincerely doubt their genuine vision for Nigeria.

“It should be clear to all and sundry now irrespective of the region that the present system will never and ever give chance to the best president Nigeria can ever elect, no matter the knowledge and sincerity of such president.

“This deformed, unworthy, imbalance, unworkable and unfair current system cannot develop or take Nigeria higher but can only destroy impoverish her people. They should rather support the call for restructuring and unitedly ensure the president, National Assembly members and other stakeholders key into this system that can save Nigeria.

“We can clearly without any contradictiion posit that 90% of Yorubas are giving up, tired of Nigeria and we cannot continue to suffer in the midst of plenty. This is the reality.

“The better the president of Nigeria, president Mohammed Buhari knows this. We respect him, and we even support him this far, but we cannot sacrifice plain truth and our people who we pledge to always defend and protect,” the group noted.