Northern Groups Give Igbo Three Months To Leave North Or… 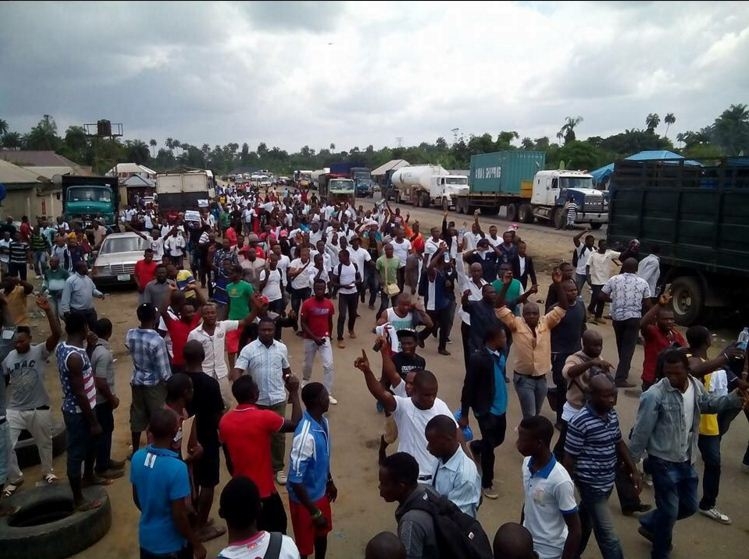 In a communique dated May 30, 2017 and obtained by our correspondent, the coalition said it was no longer going to keep quiet over the “Igbo persistence for secession.”

READ THE STATEMENT BELOW:

The persistence for the actualization of Biafra by the Igbo of South-Eastern Nigeria has lately assumed an alarming twist. The new dimension which involved the call for the forceful lock-down of activities and denying of the right to free movement in South-East by the rebellious Indigenous People of Biafra group is so disturbingly embarrassing that in our view, calls for a rethink. The latest action amounted to a brutal encroachment on the rights of those termed as non-indeginous people residing and doing lawful businesses in those areas illegally demarcated and defined as Biafra by the Igbo. Concerned by this ever-escalating threat, the above-named northern groups met at the end of which we came up with the following set of resolutions to be adopted as the position of the Northern region.

1. The Igbo people of the South-East, not repentant of the carnage it wrought on the nation in 1966, is today boldly reliving those sinister intentions connoted by the Bifran agitation that led to the very first bloody insurrection in Nigeria’s history.

2. Emboldened by the apparent indifference of the Nigerian authorities, the Igbo secessinist tendency is widening in scope and action at every stage.

3. As the threat widens and affects other law-abiding people of other regions residing in or passing through the East, the Igbo leaders and elders by their utterances and direct action or inaction appear to support and encourage it.

3. While this intimidation and aggression persists and grows in dimension with each new move, leaders of the North whose people are at the receiving end of the threats appear helplessly unperturbed.

4. Rather than endorsing a concise framework for preemptive action to protect and safeguard the interest of the North and its people, leaders of the region at every stage tend to recline on a flimsy and long-discarded excuse of having faught in the 60s to keep Nigeria united.

5. Rather than pursuing a resolute action, the northern leaders have adopted and are dragging its people into pitifully percifist position in order to sustain an illusive national cohesion that has long been ridiculed by the Igbo and other sections of the country.

1. At this point we call the attention of the Nigerian authorities to the fact that the North, a critical player in the federal arrangement is no longer disposed to tolerating further Igbo blackmail and intimidation.

2. In this respect, it is our considered view that rather than the Igbo continuing to hold the whole country to ransom, the should be allowed to go their own way.

3. It is on record that the Igbo has done more damage to our collective nationhood than any other ethnic group in Nigeria:

a. The Igbo was responsible for the very first violent interference with democracy in Nigeria resulting in a prolonged counter productive chain of military dictatorship.

b. The Igbo was responsible for the first and so far, only civil war in Nigeria that coated millions of lives and sowed the seed of the current mutual suspicion and distrust.

c. Indisputably the Igbo is responsible for Nigeria’s cultural and moral degeneracy with the notoriety for all kinds of crime including international networking for drug and human trafficking, violent robberies and kidnapping, high-profile prostitution and adanced financial fraud.

3. It is also on record that since the inception of the current democratic dispensation, the Igbo has shown and maintained open contempt and dissension to the collective decision expressed by a majority of Nigeriansat various stages through generally acceptable democratic processes.

4. Having come this far, we wish to categorically state that the North is no longer keen in being the same country with this unruly pack of unrepentant hooligans.

5. That the North supports and encourages the authorities and other national and international stakeholders to allow the rebellious Igbo to go their way.

6. That in the event the Igbo is not allowed to pull out, the North shall divorce this marriage that has never been convenient to any of the parties.

7. That as a prelude we call on all Igbos currently residing in any part of Northern Nigeria to relocate within two weeks and northerners in the East should do likewise.

8. That northern leaders are hereby warned against further insisting on this union with the Igbo or any other part of Nigeria that is disposed to self-determination.‎

In conclusion, we wish to draw the attention of the authorities and all other interest groups that there is nothing difficult or impossible for all the units that make up Nigeria to pull out if they so wish. We cite the example of the split of several independent nations from the old Soviet Union, the separation of Pakistan from India, the recent divorce of South Sudan with the former Sudan and most recently, the exit of Britain from the European Union.