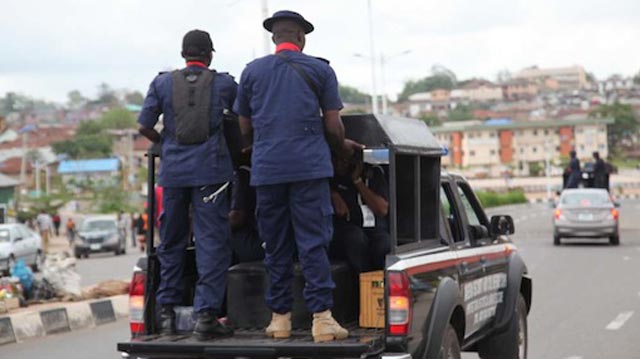 The Osun State Command of the Nigerian Security and Civil Defence Corps has arrested a mother, Zainab Afeez, for pouring hot water on her daughter.

The hot water caused injury on the body of the 11-year-old daughter ( name withheld) of the suspect.

The suspect was said to have given birth to the victim in her first marriage and she brought her to live with her with her new husband.

Neighbours told journalists that the new husband no longer intervenes anytime his wife starts beating the girl because he intervened one day and the woman attacked him.

The victim was said to have angered her mother when she misplaced a key and she fled the home because her mother had vowed to beat her.

The woman was later said to have sent the girl to go and grind pepper at a mill but the girl refused because she thought her mother wanted to use that to lure her home.and beat her.

In anger, Zainab reportedly ran after the girl and bathed her with hot water she took from the fire while cooking.

They were said to have reported the case to the NSCDC afterwards.

The Public Relations Officer of the NSCDC, Osun State Command, Mr Daniel Adigun, confirmed the incident, saying, “the matter is under investigation, the woman and her daughter are with us.”

‘They Gave Me Wings To Fly’ — Award-winning Nigerian Journalist Olori…