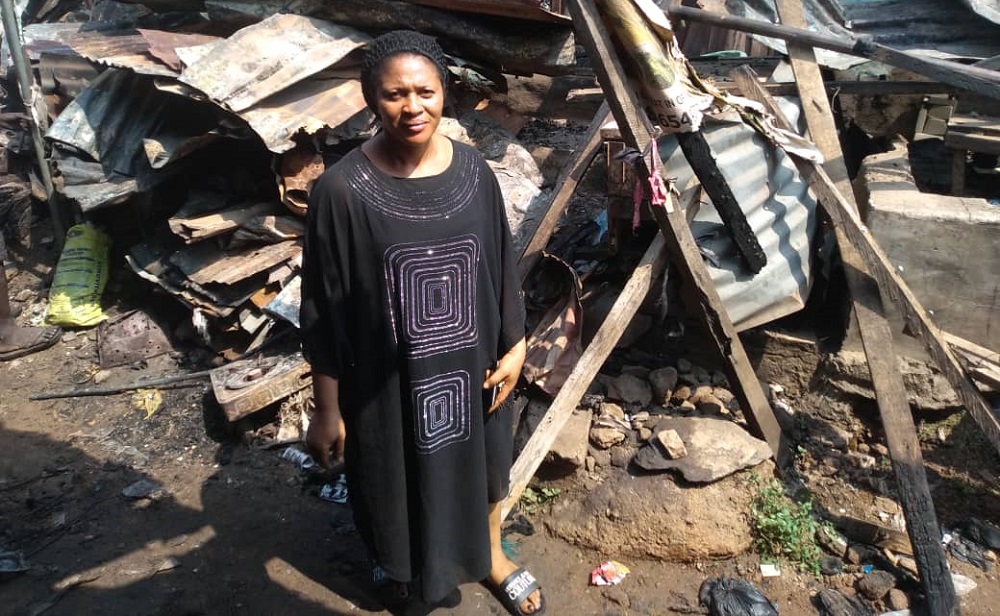 Traders bemoaning their loss at the Nyanya market following a fire outbreak have told THE WHISTLER on Wednesday that the delay in putting out the fire was due to claim by the Federal Capital Territory Fire Service that its vehicles had no water.

The market, located on the Abuja-Keffi expressway. Went up in flames on Tuesday night at about 7 pm when traders were closing for the day. Ten shops were destroyed in the fire.

According to the traders, the fire was caused by electricity spark after owners of the 10 shops had gone home.

Traders who were affected by the fire were in tears as they disclosed that the goods that got burnt were worth millions.

“Where are we going to start from? What can life be like?” some of them were heard saying as they cried.

Mrs Magret Chukwudiri Umahi, whose restaurant was razed, said: “When I got here everything in my shop was burnt down. When we contacted the Fire Service at Nyanya, they said there was no water or vehicle on ground, then we started calling the ones in town, and they later came and put off the fire.”

The mother of four, who said she took a loan to stock her shop in preparations for the coming Christmass, said the fire destroyed over N1.5m worth of equipment in her shop.

Items burnt in her shop include refrigerators, cooking cylinders and burner, TV, tables, among others.

Mr Shadrack Anaga who does repairs and also sells electronics said in tears, “I was not around when the fire started, I was called on the phone to come back to the market because I was still on my way home.

“I thought maybe the fire was burning some of the shops in one of these parks around, but I was surprised that my shop had burned to ashes when I got here.

“The goods in my shop are worth up to N2.5m. I don’t know how to explain how I feel about the incident, I’m just confused. I don’t even know what to do.”.

A fashion designer who identified her shop number as 114 on A-line said “My shop is worth over N1m. I don’t know where to start because people’s clothes are so many in the shops, about four of my sewing machines were also burnt.”

She said most traders in the market do not have any insurance cover.

“I couldn’t sleep at night, knowing that where I feed from has been razed by fire. The situation now is not helping, especially now that the economy has gone bad,” she said in lamentation.

A widow who gave her name as Mrs Joy Aroh, lost the shop she inherited after her husband’s death.
She gave it out for rent but the fire destroyed it.

Trader at the shop, Godwin John Ayidome, said goods worth over N2m were destroyed, including generators, stabilizers and fans belonging to customers.

However, Ahmed Katsina, who is the divisional fire officer of the Asokoro Fire Station which put out the fire told our correspondent that the fire service at Nyanya is under the Federal Fire Service.

“So, we and Karu fire station fought the fire together for almost two hours,” Katsina told THE WHISTLER in a telephone chat.

The Nyanya market fire comes 18 days after the explosion around Kubwa village market in the FCT which killed about six persons.

How Prostitutes Absconded With My Money Leaving Condoms, Tissues In My Keke-Tricycle…

How Touts Posing As Revenue Officers Frustrate Businesses In FCT