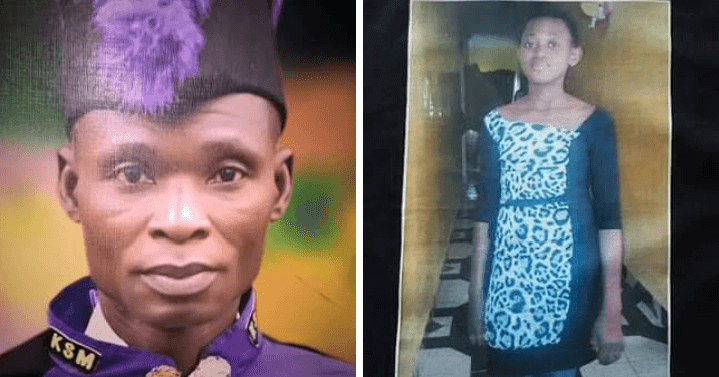 Ogbuja was remanded in prison custody for sexually violating a 13 year old Elizabeth Ochanya Ogbaje, his wife’s niece, from age eight, leading to her death, last Wednesday, October 17, 2018, due to serious complications.

When the case came up, the First Information Report (FIR), read to the accused, showed that on October 22, the case was reported by one Evangelist Enuwa Soo ‘f’ of No2/4 Potter Avenue Otada Otukpo LGA through a petition to the commissioner of police Benue state command.

According to the FIR, on 23-06-2018, the family of one Miss Elizabeth Ochanya Ogbanje ‘f’ of Agene Amen Okpokwu LGA aged 13, noticed that one Andrew Ogbuja ‘m’, a lecturer with Benue State Polytechnic Ugbokolo and his son one Victor Ogbuja have been criminally having unlawful canal knowledge of her since she was living with them in their house which resulted to her been diagnosed of having VVF and other related diseases.

“Ochanya was admitted in the hospital for treatment where she later died on 17-10-2018 at federal medical center Makurdi”.

The court further heard that during police investigation, one Andrew Ogbuja was arrested for the offence while his son is still at large, adding the offence is punishable under section 97 and 222 of the penal code of Benue State 2004.

Counsel to the accused Anthony Onoja however observed that the media have been awashed with reports of his client, who has not been proven guilty, saying if care is not taken such reports would not allow the matter to go on smoothly.

He appealed to the trial judge to protect them (lawyers) from the hands of journalists and caution the International Federation of Women Lawyers (FIDA), noting that he has no objection over the remand of his client.

However, the presiding magistrate, Isaac Ajim, overruled Onoja saying no plea was taken for want of jurisdiction and the accused was remanded at the federal prison till next adjourned date of November 29 for further mention.

It was a thug of war at the court premises as angry women who besieged the court in protest, could not be stopped by the police.

The women bore placards bearing various inscriptions like, “Ogboja must die”, “Ogbajo must be hanged with his son”, “Say No to Dehumanization of The Girl Child”, “Ogbajo’s Wife is a Disgrace to Womenfolk”.

Some men who appeared at the court premises wearing black had such inscriptions as “Justice for Ochanya Is Justice for Other Children” and among others.

Speaking to journalists after the court sitting, the president, National Council of Women Society, NCWS, Benue State chapter, Chief Mrs Okochi, said that women in the state are in pains for what happened to late Ochanya and for what other women in the country are going through.

She insisted that Ogboja, his son as well as the wife, must all be arrested to face the wrath of the law.

“We are not going to take it lightly, we need justice in this case and l beg the police to go after the son and his mother and arrest them, prosecute them especially the mother who harboured late Ochanya for five years.

“Your husband, your son using your own sister’s daughter through the anus and vagina, leading to VVF which killed her. Yet you kept quiet.

Mrs Okochi who called on all Nigerians to arise and ensure justice for Ochanya said “thank God that before the girl died, she confirmed that it was the man and his son that raped her to death. She said each time she wants to say it, they threatened to kill her. They must not go free”, she said.