One Dies As Truck Crushes Bus On Lagos-Ibadan Expressway 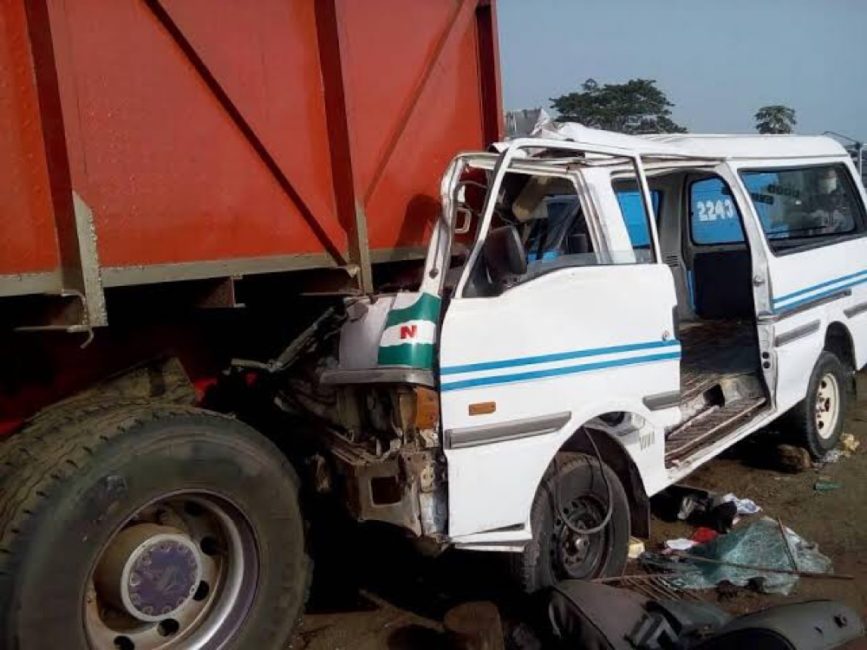 At least one person was reportedly killed as a truck crushed a passenger bus on the Lagos-Ibadan Expressway.

THE WHISTLER gathered that some other passengers in the bus were also injured in the accident which happened at about 9:50am on Tuesday.

A driver, who identified himself as Taiwo Oyewale, told our correspondent that the passenger bus was coming from Lagos direction and was moving towards Ibadan while the truck drove against the traffic.

Oyewale said he did not know the actual number of people who died but saw corpses at the scene of the accident before officials of the Federal Road Safety Corps moved the injured victims to hospital.

He said, ” I was not there when the accident happened but I arrived there few minutes after. It is obvious that the truck driver drove against the traffic.

” The driver just came out of a quarry very close to the scene of the accident and collided with the blue bus. It’s a pity that lives were lost and property were destroyed due to one man’s recklessness.

“Those trucks loading from the quarry around that place are fond of driving against the traffic. They won’t go and turn at the appropriate turning point, but instead they will face the on coming vehicles and they usually speed.”

A motorist who claimed to have seen a corpse at the scene of the crash also blamed alleged reckless driving on the part of the truck driver for the accident.

He said, ” I think the bus driver did not see the truck on time because no driver would expect that somebody would drive against the traffic on the busy road.

“There was not traffic snarl that one can say made the truck driver to drive against the traffic. He was just reckless and he wasted precious lives just like that.”

She said, ” The accident happened after Dominion University on the Lagos-Ibadan Expressway today. Three male adults were involved but one person died and another one sustained injuries.”