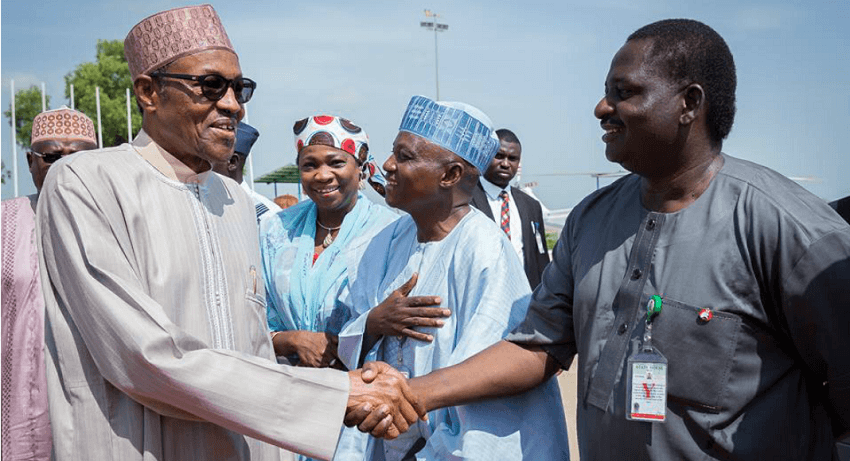 The opposition Peoples Democratic Party (PDP) has said governance under the ruling All Progressives Congress (APC) has been `reduced to comedy.’

The PDP was reacting to recent comments credited to some senior members of the APC, where they made blistering remarks concerning ex-President Goodluck Jonathan.

Jonathan, it would be recalled, had during the PDP non-elective national convention, claimed that his administration achieved remarkable feats against the propaganda being peddled by the administration of President Muhammadu Buhari.

But the Senior Special Assistant on Media and Publicity to President Buhari, Garba Shehu, reacted by saying the Jonathan administration “presided over the most monumental and tragic economic mismanagement recorded in our national history.”

Similarly, the Director-General of Voice of Nigeria (VON), Osita Okechukwu, had also slammed the previous government, where he said the Jonathan administration failed “woefully” to curb corruption.

But the PDP, in a statement on Tuesday by its National Publicity Secretary, Dayo Adeyeye, described the various statements made by the APC chieftains as “lacking in depth and are devoid of critical thinking.”

The PDP’s statement reads in part:

“1. We have read comments made by the National Publicity Secretary of the All Progressives’ Congress (APC), Alhaji Bolaji Ojo-Abdullahi, Mallam Garba Shehu, Special Assistant to the President on Media, and other senior members of the Ruling Party such as former Governor, Segun Oni and Dr. Osita Okechukwu, the Director General of the Voice of Nigeria where they attempted to rubbish the comments made by former President Goodluck Jonathan that his Administration performed well during his term in office.

“2. It is our firm belief that these statements were borne out of ignorance, lacking in depth and are devoid of the Sort of critical thinking that one would expect from highly placed government officials. However, these officials seem bent on continuing what has become an official position of the Ruling Party to reduce commentary on public issues, and indeed the art of governance to comedy.

“3. It is shameful and embarrassing that having been in power for two and a half years, the Ruling Party is unable to point to cogent, convincing and data driven achievements. Instead, it has spent the bulk of its time designing and implementing a communication strategy around massive propaganda, half truths and outright falsehood in an attempt to continually deceive the Nigerian people.

“5. For the avoidance of doubt, some of the achievements of our Party while in power include:

“ (a) As at May 29, 2015, Nigeria was the Largest Economy in Africa valued at over $500billion. A combination of the incoherent policies and incompetence of the Ruling Party have significantly shrunk the size of the Nigerian Economy since the Inception of the Current Administration.

“ (b) As at May 29, 2015, Nigeria was the No, 1 Destination for Foreign Direct Investment (FDI) in Africa. Up to that point, investors responded to the policies designed and implemented by the Jonathan Administration by investing billions of Dollars in the Nigerian Economy.

“However, since the Inauguration of the Buhari Administration, investors have voted with their feet having been discouraged by the inchoate and incoherent policies being implemented by the APC led Federal Government.

“ (c) The Jonathan Administration maintained a ‘Single Digit Inflation Rate’ for several years. Inflation stood at 9.6% at the Inception of the Buhari Administration. The incompetence of the Current Economic Management Team has resulted in inflation rising as high as 18.72% in January 2017 before settling at 16.1% in July 2017. This had led to the Skyrocketing of the Price of goods, services and food items thereby making staples unaffordable to millions of Nigerians.
“It is not a coincidence that the last time Nigerians had to deal with the Current level of widespread hunger and lack was when President Muhammadu Buhari held sway as military Head of State between 1984 and 1985.

“ (d) The APC led Federal Government inherited an economy that had grown at an average of 7% per annum for the previous 10 years. Indeed, when President Buhari spoke at the Chatham House in February 2015, he admitted that the Nigerian economy had experienced growth for several years. At the time, several global economic experts projected Nigeria to be among the top 7 growing economies in the world in 2016.
“However, the APC led Federal Government has managed to lead the Nation to 6 consecutive quarters of economic recession without a coherent, cogent strategy to bring our economy out of the woods.

“ (e) The Jonathan Administration is widely acclaimed for conducting free, fair and credible elections. Since the Inception of the Current Administration, Nigerians have witnessed widespread and blatant manipulation of the electoral process to suit the whim of the Ruling Party. Easy examples can be found in the refusal to postpone the Ondo State Gubernatorial Election even though valid reasons existed that warranted its postponement; and the postponement of the Edo State Gubernatorial Election for no justifiable reason when it became obvious that the Ruling Party was going to lose that election to enable it manipulate the process. Since the Inception of this Administration, the Phenomenon of “inconclusive elections” has become a regular feature of our electoral system.

“ (f) The Jonathan Administration had implemented an agricultural sector transformation programme that ensured a reduction of the National Food Import Bill by encouraging increased local production of staple food items. An example of the Results of this policy was the Reduction of the Price of a bag of rice from N14,000 per bag in 2012 to N8, 500 in 2014. The Price of a bag of rice currently stands at N18, 000 having peaked at N22,000 per bag in 2016.
“The success of this programme ensured that the Massive flooding which hit many farming communities in the food production belts of the Country in 2012 did not result in famine and a radical increase in the costs of staple food items.

“It is imperative to point out that, despite being in charge of the Executive and possessing a majority in both houses of the National Assembly, the Ruling Party has failed to add anything to or strengthen the Anti-corruption framework and infrastructure of the Country.

“It is also incumbent on us to point out that the Current Administration has taken a pedestrian approach to fighting corruption by engaging in media trials rather than actively prosecuting cases in court. This approach has had an adverse effect on the Country with the Egmont Group, an international financial intelligence sharing anti-corruption body, using the Nigerian prosecution agencies penchant for sharing sensitive information with the Media as a basis for Nigeria’s suspension from the Group.

“6. The list of achievements of the Jonathan Administration, and indeed past PDP administrations, are too numerous to mention and completely dwarf the wasted years of APC’s governance.

“7. It is important to note that several senior members of APC who constantly feel the need to deride and denigrate our Party using falsehoods as a foundation were once members of our Party. It is important to point out, for instance, that Alhaji Bolaji Ojo-Abdullahi was a Minister under the Jonathan Administration, Chief Segun Oni was also a former member of our Party on whose platform he rose to become Governor of Ekiti State.

“Having served in such offices, it does not lie in the mouth of such men to state that PDP failed Nigerians. If these men, and others of their ilk find it so convenient to deny their past, we wonder what they will say about the Present in the near future.

“8. It is necessary to inform the Ruling Party that Nigerians are suffering under the Weight of the Anti-people policies they have been forced to live and do business under. As a result, the Ruling Party’s days at the helm of affairs are numbered. The professional propagandists of the APC will realize too late that blaming the ills of the Country on past administrations while doing nothing about them for four clear years will not save them on the Day of Judgement. And the Day of reckoning is very much at hand. ”