Petr Cech Hope To Win Trophies With Arsenal, After A Sensational Move From Chelsea 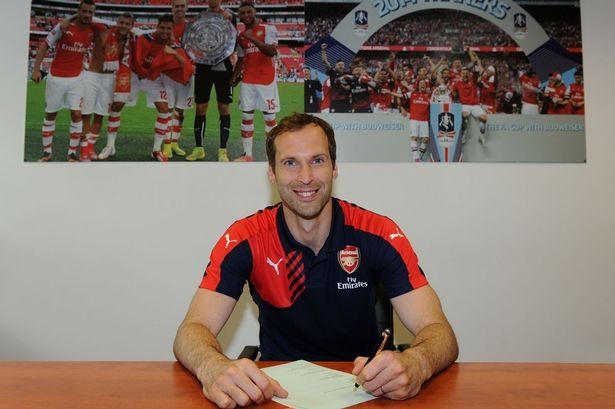 The Czech goalkeeper won 15 pieces of silverware in 11 years at Stamford Bridge, including the European Cup and four league titles

Petr Cech believes he can continue being a serial trophy winner at Arsenal.

Chelsea legend Cech called time on his brilliant Blues career today to join the Gunners after losing the battle of Stamford Bridge for the No.1 spot to Thibaut Courtois.

The 33-year-old got his hands on virtually every piece of available ­silverware in his 11 years in SW6.

Cech lifted every English honour at least twice along with the Champions League and Europa League in an incredible haul of 15 Chelsea trophies – four league titles, four FA Cups and three League Cups plus the European Cup, Europa League once each and two Community Shields.

Arsenal have rediscovered their trophy-winning knack, lifting the FA Cup in each of the last two seasons, and Cech is confident the prizes will keep on coming his way after sealing a £10million switch.

Cech, who faces a rapid reunion with John Terry and Co in the ­Community Shield at Wembley on August 2, said: “Arsenal is a team that challenge for the top and it definitely matches my ambition and personal motivation.

“I believe at this time of my career I made a good choice and will have the success I would love to have.

Cech’s and Arsenal’s major trophies since he joined Chelsea

“I am as hungry as ever and have the same commitment and motivation to win trophies as I had 10, 15 years ago – or as a kid.

“Having spoken to the manager Arsene Wenger, I will find that here.

“I will find a team which wants to be successful and wants to challenge the best teams in Europe, and this is an exciting project for me.”

Star thanked Roman Abramovich for agreeing to switch
Wenger said: “Petr Cech is a player that I have admired for a long time and I am very pleased that he has decided to join us.

“He has proven over many seasons that he is one of the outstanding keepers in the world and he will add great strength to our squad.”

Cech was given the green light to join Arsenal after Blues owner Roman Abramovich overruled manager Jose Mourinho, who was reluctant to see him head for north London.

Mourinho knows Cech will be a vital piece in the jigsaw for the Gunners, who have lacked a dominant and reliable No.1 since Jens Lehmann’s best days.

In a heartfelt letter to sign off his Chelsea career, which notably included no namecheck for Mourinho, Cech admitted: “I thought this would never happen but it’s time for me to say goodbye to Chelsea Football Club.

“The club I have lived every single minute for since I joined in July 2004, the club in which I thought I’d hang my gloves and boots one day and finish my career.

“But life doesn’t always turn out the way you think it will.”