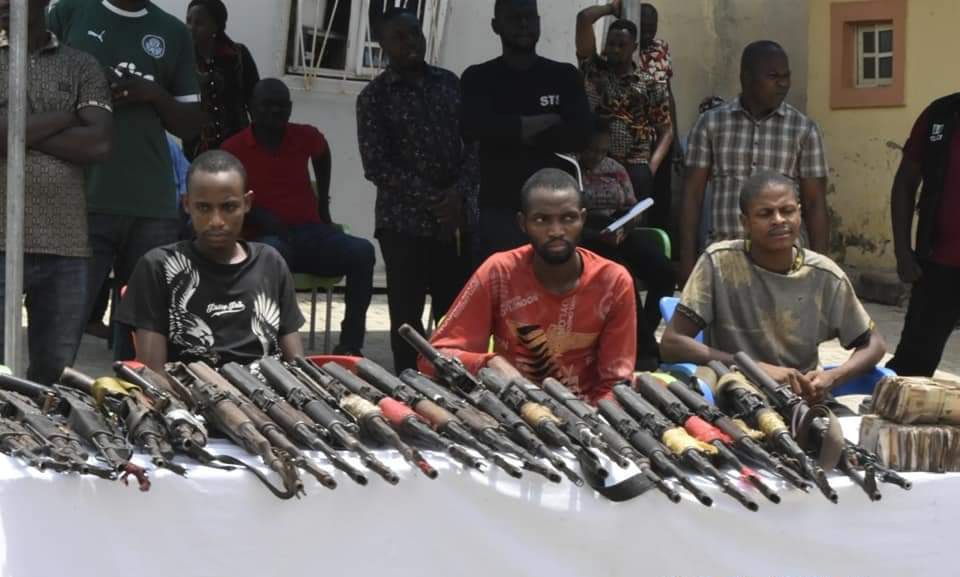 The Nigeria Police Force has arrested one Aminu Lawal (aka Kano), and Murtala Dawu (aka Mugala), for their involvement in several abductions especially in the North West region of the country.

Operatives of the Force Intelligence Bureau Special Tactical Squad (FIB-STS) arrested the duo after their names were mentioned in connection to the kidnapping of Bethel Baptist School students in 2021.

The police while parading them on Wednesday said the suspects had confessed to working in synergy with the kidnap kingpin known as Yellow Ashana.

Prominent among their criminal act was the murder of two police officers and one vigilante in 2021 which they had confessed to.

“They equally confessed to the kidnap of students from the Greenfield University in Kaduna State, the mindless murder of five victims before the payment of ransom, and the eventual release of the others.

Others recovered include one G3 rifle, one Dane gun, 376 rounds of live ammunition of different calibres, and a cash sum of two million Naira, from the suspects in the course of investigations.

Similarly, a five-man trans-border syndicate that carries out kidnapping operations between Adamawa State in Nigeria, and Burha, Fituha, and Kesu in Cameroun were arrested.

Adejobi noted that the gang comprising males between the ages of 18 -30 from Mubi, Adamawa State, targets wealthy individuals who possess beautiful houses or cars.

“They confessed to the kidnap and multiple rapes of a newly wedded woman at Askira Uba Local Government Area of Borno state whom they released upon receipt of a million Naira ransom.

“They were apprehended by operatives of the FIB-STS after collecting a ransom sum of 2 million Naira for one Alhaji Moni of Buladega Village on the 11th of May, 2022.

“The Inspector-General of Police, IGP Usman Alkali Baba, psc (+), NPM, FDC, while commending the FIB-STS operatives for the successes recorded, assured that all criminal elements will be smoked out of their hiding places and would answer to their crimes in due course.

“All the suspects will be arraigned in court on completion of investigations,” the statement said.