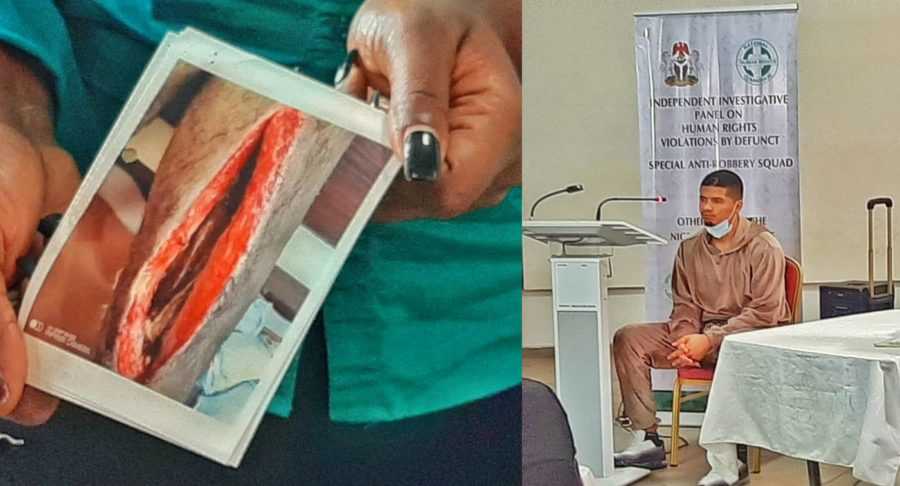 A 20-year-old petitioner, Prince Chigaemezu Ojinnaka, wants the Independent Investigative Panel probing alleged police brutality in Abuja to prosecute an officer who allegedly damaged his legs after shooting him at close range.

Ojinnaka, in his petition, said the incident punctured his dream of venturing into football as a career.

His petition, which bordered on alleged torture, cruel, inhuman and degrading treatment, was brought before the panel against an operative of the O.C Operation Search and Flush Owerri, Imo State Police Division, Dan Iroakazi State CID, Imo State, Imo State Commissioner of Police and the Inspector General of Police.

According to his testimony, on 14 April 2020, he encountered two police men along Amuzie Omanze road, Umuku/Isu Njaba community, while riding a motorcycle to go see his grandfather at the hospital.

He said the officers told him to stop and while trying to obey, he was shot by one of them on his foot.

Upon realizing what had happened to him, he said the officers took off and left him bleeding. He noted that their van was tagged “flush and search”.

The petitioner further narrated that he was rushed to the Federal Medical Center, Imo State, where surgeries were done on his feet to remove the bullets, but that the pellets have remained in his feet and causing him serious pain.

Robbers Disguising As Police Arrested After Victim Identified Them In Imo

He added that he was flown to Ukraine where another surgery was conducted on his already swollen feet which saved him from having his legs amputated.

Ojinnaka further alleged that what the police did to him on that day damaged his limb, leaving him with no sensation in his feet.

The petitioner urged the panel to also compensate him for the trauma and pain he was made to go through.

“I don’t feel secured any time I see a policeman in my father’s land,” he added.

On his part, the lawyer representing the police, James Idachaba, felt sorry for the condition of the complainant.

The panel urged Idachaba to ensure that Dan Iroakazi appeared before it on the next hearing scheduled for April 27, so as to tell his side of the story.

The lawyer was also ordered to get the names of the operatives stationed at the place of the incident on that day and who were in the van marked “No 18”.