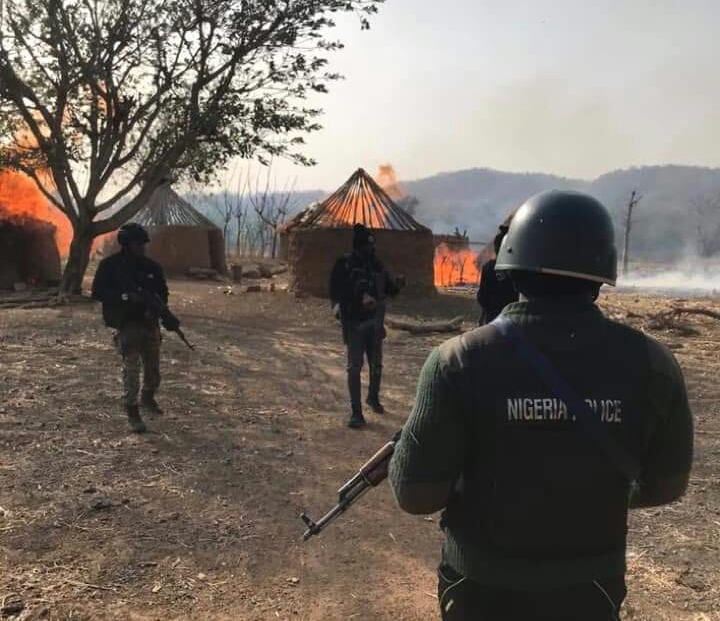 The Nigeria Police Force (NPF) has provided photo evidence to prove that it recently raided the hideout of the “Ansaru terrorist group” at the Kuduru Forest in Birnin Gwari, Kaduna State, on Wednesday.

This followed the disbelief that trailed its claim that at least 250 terrorists and bandits were killed by its special forces during the raid.

THE WHISTLER had earlier reported how Nigerians who reacted to the news on social media expressed doubt that the force launched the said offensive on the alleged terrorists.

“In the aftermath of the Police counter-terrorism operations which successfully neutralized the operational bases of the Ansaru Terrorists’ Group and bandits, one Haruna Basullube ‘m’ – one of the most wanted kidnappers/cattle rustlers in the country and one Bashir Leta ‘m’ – another notorious bandits’ commander were killed; while one Mallam Abba ‘m’ – Commander of Boko Haram camp in Kuduru Forest and one Mofa ‘m’ – a notorious kidnapper were critically injured.”

The Force PRO said some of the exhibits recovered by the Police during the operation include 11 AK47 rifles, 730 rounds of live AK47 ammunition, 152 rounds of GPMG ammunition in two chains, 13 pairs of military camouflage uniforms, 2 cartons and 48 sachets of tramadol, four facemasks, phones and other electronic gadgets which are currently subject of forensic investigations.

The force added that one of its officers,Inspector Muhammed Abubakar attached to the Police Special Forces, died as a result of injuries he sustained during the raid on the terrorists’ camp.

It said other officers who sustained injuries and are receiving treatment include two Superintendents of Police, one Deputy Superintendent of Police, four Inspectors and six Sergeants as well as the Pilot and Co-pilot of the police helicopter used during the operation.

The statement said the Inspector General of Police, Mohammed Adamu, condoled with the family of Inspector Abubakar and restated the commitment of the force to the safety of its personnel and the nation.

Mba added that IGP Adamu has “deployed crack detectives and special forensic investigators from the Force Headquarters to expedite investigations into the broad criminal enterprise of the group and their associates.”

He said the IGP urged the residents of Birnin-Gwari to not hesitate to report suspicious activities in the area to the police.