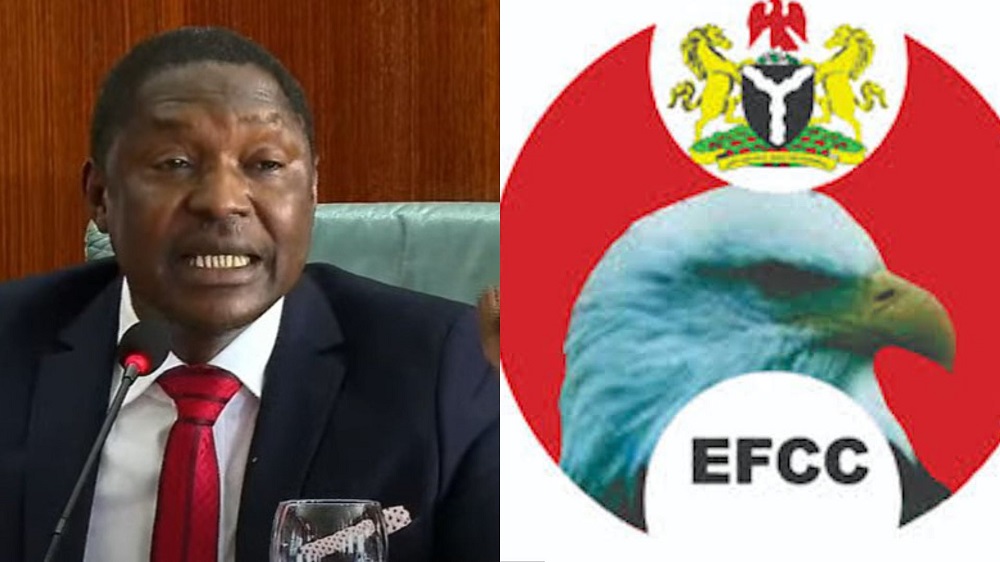 The Attorney-General of the Federation and Minister of Justice, Abubakar Malami SAN, has supported the ongoing investigation by the Economic and Financial Crimes Commission, EFCC, of one of his aides, Ladidi Mohammed.

Mohammed is head of the Asset Recovery Management Unit (ARMU) of the Federal Ministry of Justice.

During the 46th session of the State House briefing on judicial reforms and justice dispensation on Thursday in Abuja, Malami was asked to react to the probe of his aide by the EFCC over an alleged sale of recovered assets.

The AGF replied that it was better to allow the anti-graft agency conclude its investigation within the confines of the law.

He said, “As you rightly know, that subject is indeed been investigated by the EFCC and it is only natural that we should allow investigation to take its natural course. As the Chief Law Officer, I would not like to be preemptive of any investigative process taken into consideration that there is need to cover the circle. So I wouldn’t like to comment one way or the other, in view of the pendency of investigation over the matter.”

Earlier, Malami told the press that the Buhari administration had done well on judicial reforms and justice dispensation with particular emphasis on the past 18 months.

“The ministry has so far secured over one thousand (1000) convictions on terrorism.

“Convictions have been secured in 45 cases by the Complex Casework Group (CCG) , Maritime Unit, and the Special Task Force on Electricity Offenses and across the 13 Zonal offices in the ministry.

He also pointed out that a total sum of N1,822,788,146.86 was generated from the sale of bid forms and actual sale of forfeited properties during the period under review.

He added that an inter-ministerial committee on the Audit and Recovery of Back Years on stamp duty (IMC) was inaugurated which has so far recovered the sum of N596,055,569.47.