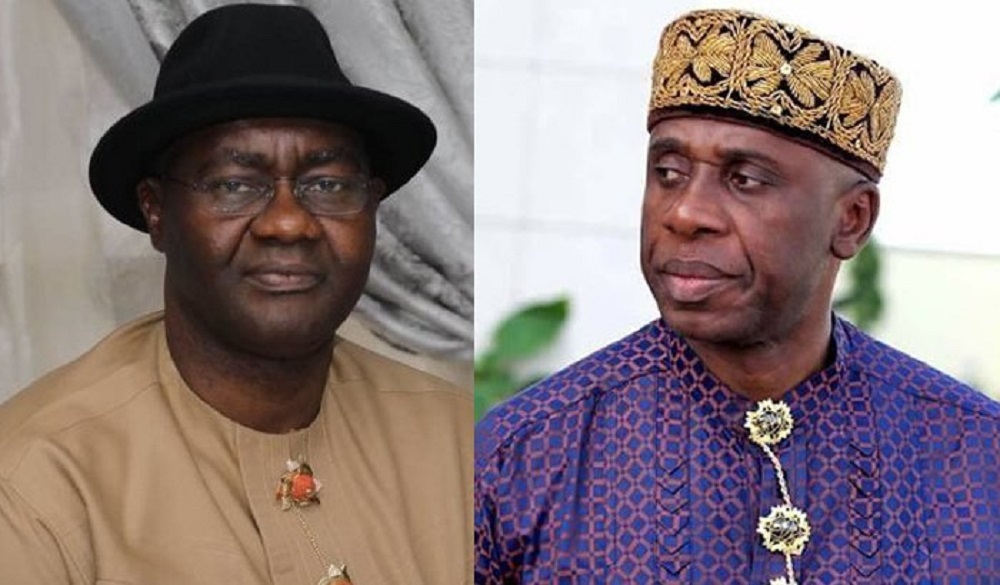 The two foremost All Progressive Congress leaders in Rivers State, Rotimi Amaechi and Magnus Abe, have continued to fight each other while also factionalizing the party.

Amaechi is the current minister for transportation while Abe is a former senator representing Rivers South-East Senatorial District.

On Wednesday, Chief Emeka Beke, chairman of the APC in the state, issued a statement in defense of Amaechi while also advising Abe to act more maturely by not slandering Amaechi

He was responding to a statement issued on Monday by Abe, a former senator, where he alleged that Amaechi was behind a recent claim by a group that he(Abe) met with Barrister Worgu Boms and the Rivers State PDP Chairman, Ambassador Desmond Akawor, and planned how to sink the APC in the state.

Abe had described the allegation as a desperate attempt to blackmail him ahead of the national convention of the APC.

Abe said the smear campaign against him is being sponsored by Amaechi, noting that “frustrated people will always do desperate things.”

But in his response on behalf of Amaechi, the APC chairman urged Abe to be cautious about his utterances against Amaechi while claiming the minister is not part of any smear campaign against anyone.

The statement reads, “Our attention has been drawn to a press statement by Senator Magnus Abe expressly accusing the Honourable Minister of Transportation, Rt. Hon. Chibuike Rotimi Amaechi, and leader of APC in Rivers State, as being behind a recent press conference by some two individuals who confessed to working with Senator Abe to undermine our Party in Rivers State.

“After our preliminary investigation into the matter, we unequivocally absolve the Minister of such a wild accusation but rather urge Senator Abe to discreetly and diligently examine those he has been in political bed with for an answer to what is unraveling. The best place for Abe to start his investigation should be around the two gentlemen who appear not to be under any form of duress in the video clip in question that has gone viral in the media.

“Alternatively, Senator Abe may have to present to the Party and Nigerians concrete and verifiable evidence to support his accusation as failing to so do will present him as undeniably guilty of the same offence of character assassination he is leveling against others.

“We advise Senator Abe to always exhibit maturity and not allow himself to be driven by instinctive emotions in the face of serious developments that otherwise require a measured and calculated reaction.”

Bitcoin, Other Crypto Investors Lose Over $150bn To Russia-Ukraine Crisis