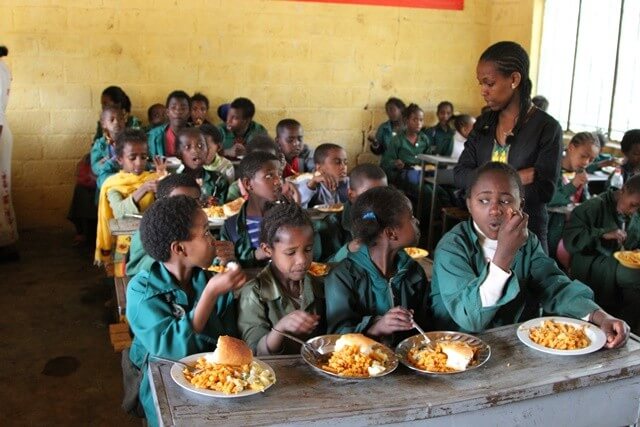 NAN
63
SHARES
ShareTweetSubscribe
#mc_embed_signup{background:#fff; clear:left; font:14px Helvetica,Arial,sans-serif; width:90%;} /* Add your own Mailchimp form style overrides in your site stylesheet or in this style block. We recommend moving this block and the preceding CSS link to the HEAD of your HTML file. */ (function($) {window.fnames = new Array(); window.ftypes = new Array();fnames[0]='EMAIL';ftypes[0]='email';fnames[1]='FNAME';ftypes[1]='text';fnames[2]='LNAME';ftypes[2]='text';}(jQuery));var $mcj = jQuery.noConflict(true);

The School Feeding Field Monitors of a Non-Governmental Organisation, Connecting Gender for Development (COGEN), on Wednesday alleged that teachers are taking the rations meant for pupils in some schools in Kaduna State.

Rachael Musa, one of the monitors, during a Town Hall Meeting on the Federal Government’s Home Grown School Feeding Programme in Kafanchan, Jema’a Local Government, said the ration do not usually go around.

Ms Musa also said although every child was supposed to be given an egg once a week, the eggs do not usually go round because of short supply.

Similarly, Monday John, another monitor alleged that some politicians were collecting money from food vendors on the ground that they were not members of the ruling All Progressive Congress.

Mr John also said that some members of the Peoples Democratic Party have equally stopped their children from eating the food, saying it could be poisoned.

He described the development as serious, and urged those involved to stop the act so as not to sabotage the programme.

Yakubu Kyari, the Desk Officer of the programme in the local government, said he receives between 300 and 400 crates of egg weekly instead of the 730 crates for the 177 schools in the area.

Mr Kyari said teachers eating up food meant for pupils have been warned to desist from the act or risk sanction.

COGEN Head of Programmes, Ebenezer Omolekun, told the town hall meeting that findings by the NGO revealed that one egg is being shared for between two to four pupils in 46 schools, while two pupils share juice and biscuit in 26 schools.

He explained that the meeting with the theme, “Together We Can Build Our LGA and Make it More Prosperous” was primarily organised to mobilise communities and stakeholders to monitor the implementation of the school feeding programme.

He explained that COGEN, with support from MacArthur Foundation is tracking the programme in 60 schools, 20 each in Kaura, Jema’a, and Zangon Kataf Local Government Areas.

He said that the goal was to ensure successful implementation of the programme in promoting learning, enrolment, retention and completion of primary schools by pupils.

The official said that similar town hall meetings were organised in Kaura and Zangon Kataf to enlist community support in monitoring the programme.

“What we want is to ensure transparency, accountability and responsiveness by all stakeholders involved in the programme,” Omolekun said.

Also speaking, the Chairman of the Local Council, Peter Averik, commended the NGO for supporting the fFederal government initiative and pledged their support “because the programme is for the benefit of our children and our community.”

Also, Hosea David, District Head of Ambam Kaninkon, commended the NGO for creating the needed awareness on the programme and enlisting their support to ensure success.

The News Agency of Nigerian (NAN) reports that 420 schools in the state are being tracked by five NGOs with support from Macarthur Foundation.