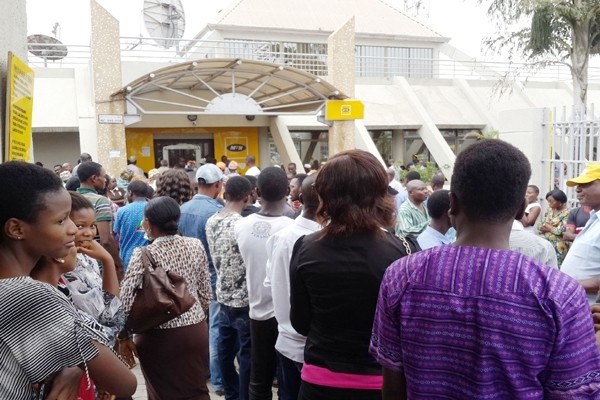 Offices of the four major telecom service providers, to include MTN, Airtel, Globacom and Etisalat were crowded by angry and frustrated subscribers.

Before now, telecom operators have been sending notifications to the affected subscribers to visit their offices for valid identification card to complete their registration.

The NCC had announced that it has given the four major telecom operators in the country a one week ultimatum to either register the SIM cards of their subscribers whose data were not properly taken or pay a fine of N120 million.

According to NCC, about 38.78 million phone lines were identified with incomplete registration across the networks, out of which 10.7 million were barred.

A subscriber who spoke to newsmen said that his line was registered on several occasions, and that there was no notice of incomplete registration sent to him before he was denied access to services.

Another subscriber, who said the notice created panic, called on the operators to stop sending such SMS to those who have registered their lines.

In the nation’s capital, Abuja, there was chaos at the MTN office, as hundreds of subscribers pushed and shoved themselves in a bid to register their sim cards.

Many MTN subscribers who had gone to the MTN office claimed that the officials did not attend to them.

However, when contacted, the public relations and protocol manager Corporate Services Division of MTN said it has mandated all its registration outlets to remain “open till 8 pm until further notice” in order to reduce the crowd at the outlets.

She said; “MTN regrets the inconvenience being experienced as a result of the on-going SIM re-validation exercise in our service centres and other outlets nationwide. We are doing everything humanly possible to make the process seamless, timely and efficient. To minimize the human traffic at our walk-in/service centres, it is important for affected subscribers to know that they can also revalidate their registration details at all MTN sales outlets including the nearest agent and dealer shops. For the convenience of our customers, we have mandated all our registration outlets to remain open till 8pm every day until further notice.”

Meanwhile, NCC, through its vice chairman and chief executive officer, Efosa Idehen and Yetunde Akinloye have given the telecom operators in Nigeria till September 9th to pay a fine of N120.4m for their failure to comply with the directive to deactivate pre-registered and defective SIM cards from their network.