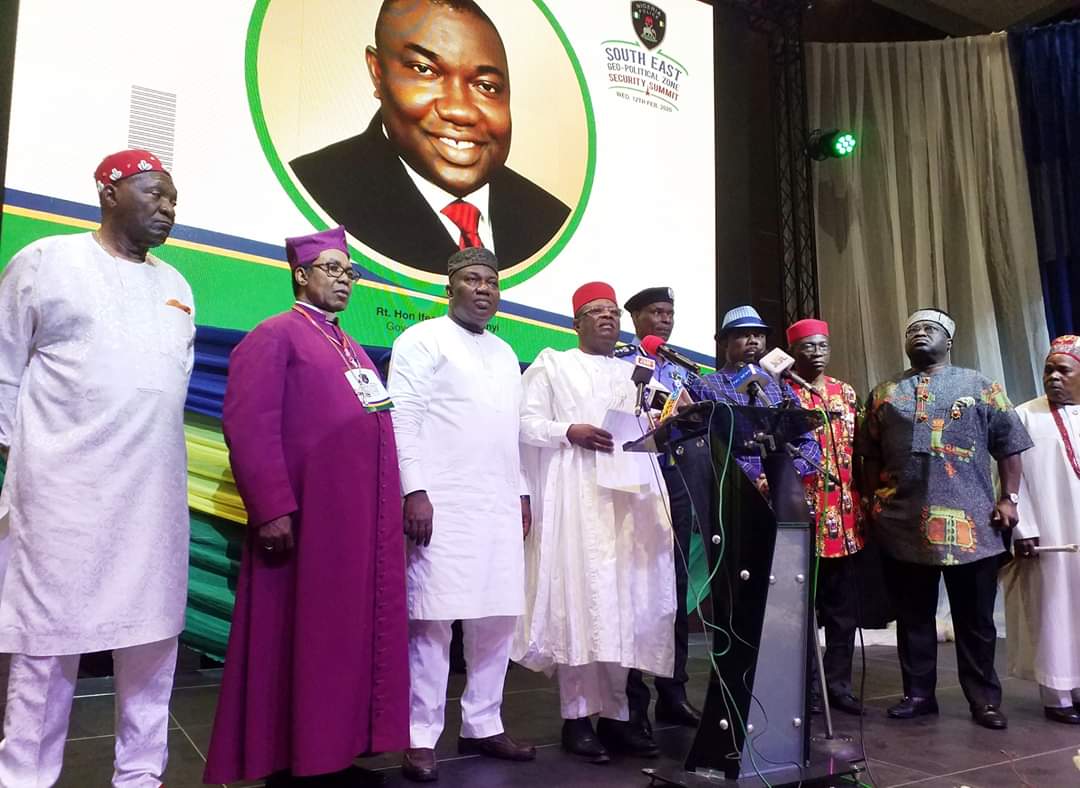 Governors of the South East Geo-political zone, on Wednesday, endorsed the new community policing model of the Nigeria Police Force (NPF), for effective security in the zone.

Rising from the South East Geo-political Security Summit, initiated by the Inspector General of Police (IGP),Mohammed Adamu Abubakar, the governors in a communiqué read by the Governor of Ebonyi State and Chairman of the South East Governors’ Forum, Engr. David Umahi, said that contents of the new community policing strategies of the police were not different from the security measures already in place in the zone.

Gov. Umahi disclosed that South East Governors, before the summit, had a closed-door meeting with the Inspector General of Police, at the Government House, Enugu, where the police chief explained to them extensively the concept and effectiveness of community policing in addressing security challenges in the zone.

Other governors at the event include the host governor, Rt. Hon. Ifeanyi Ugwuanyi, Governor Willie Obiano of Anambra State, Governor Okezie Ikpeazu of Abia State and the governor of Imo State, represented by his deputy, Prof. Placid Njoku.

Speaking further, Gov. Umahi added that all security concerns raised by the traditional and religious leaders in the South East zone, including those presented by the Imeobi of the Ohanaeze Ndigbo, at the last meeting of the South East Governors’ Forum, have been addressed in the community policing strategy of the Nigeria Police Force.

The governor who maintained that the people of the zone will begin to see a lot of positive changes following the summit, pointed out that the governors have agreed to invest in social intervention programmes for teeming youths of the zone.

According to him, “The community policing was proper, and it was explained to us in full details and it is not different from our Neighbourhood Watch and the Vigilante operation, the Forest Guard, the gate keepers, the herdsmen and farmers conflict committees and others.

“And so we saw that this is totally in tandem with what we pray. We decided as your governors to embrace this initiative of community policing, which is an official endorsement in line with what the police and what we are doing to safeguard the lives and property of our people”.

In his address, IGP Adamu Abubakar, who described the South East summit as the best in the country, noted that the event was “convened within the framework of our community policing initiative and as part of the strategies of Nigerian Police to employ all inclusive strategy towards helping us in the achievement of our internal security management, particularly in the South Eastern states”.

The IGP disclosed that the community policing approach was necessitated by the increasing complexity of crime and the challenges of policing the vast and diverse country such as Nigeria, stressing that “this requires that the Nigerian police should continually engage the citizens in seeking their input and soliciting their support”.

He appreciated the governors of the South East, the traditional rulers, religious leaders and other stakeholders across the states of the zone for their active participation in the event which he said was “the 6th and the best of the security summits” across the six geo-political zones of the country.

“All the summits ended in a very successful outcome and I am delighted to confirm that the strategies jointly developed as well as the partnership we built at the meetings that were so far held, have been effective in addressing the security tricks that are peculiar to each of the geo-political zones.”

Earlier in his address, Gov. Ugwuanyi who welcomed the Inspector General of Police to Enugu State, on behalf of his colleagues, expressed optimism that the summit’s outcome will facilitate rejigging and re-tooling of the security architecture in the South East Geo-political zone and bring it up to speed with emerging dimensions of insecurity and criminality.

While noting that the summit was “both timely and most compelling”, Gov. Ugwuanyi congratulated the Inspector General of Police and his team for the great initiative, maintaining that his administration has not rested on its oars in providing a safe and secure environment for residents to live, work and enjoy their leisure.

According to him, “We have strengthened our Neighbourhood Watch Associations, blazed the trail in enthronement of Forest Guards which is a novel initiative of the South East Governors Forum and have continued to support the security agencies in our state with security patrol vehicles, communication gadgets, etc.

“We have institutionalized the needed collaboration between our Neighbourhood Watch groups, Forest Guards and security agencies especially in the area of intelligence sharing. Enugu State Security Trust Fund law is in place to ensure sustainable support for security agencies in the state while the State Forest Guards law is before our State House of Assembly.

“We are also on the threshold of deploying our Automated Drone Surveillance Solution to give the needed impetus to our security surveillance.

Gov. Ugwuanyi who stressed his administration’s commitment to security and welfare of the people as enshrined in the country’s constitution, expressed hope that the outcome of the interactions will chart the course for improved security of the South East zone “as a significant co-factor in our economic development”.

One Billion Barrels Of Crude Oil Discovered In Northeast – Sylva