States To Get 3,000 Tinubu Branded Rice As Sallah Gift 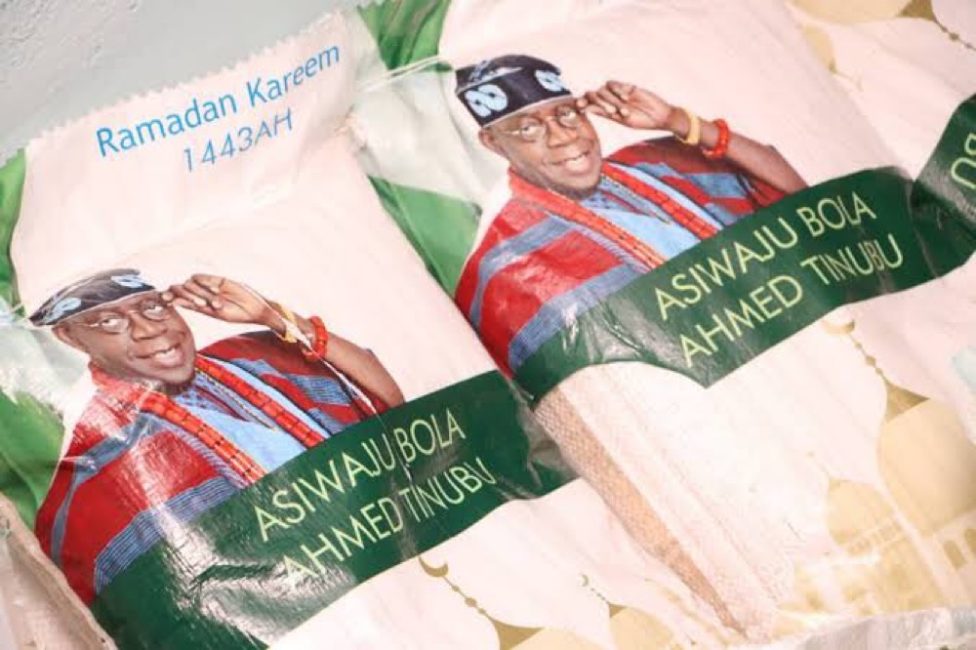 Not less than 10 Northern States will receive bags of rice for sallah celebration as free gifts from frontline aspirant for the presidential ticket of the All Progressives Congress, APC, Mr Bola Tinubu.

Sallah celebration culminates a month-long fasting of Muslims where the faithful engage in intense prayer for the remission of sin.

Tinubu, a former governor of Lagos State (1999-2007), is known for sharing foods and other items during Muslim periods of celebration and like other politicians usually dole out foods and items during political campaign.

According to aides, not less than 10 states in the North of Nigeria will benefit from this largesse with each state billed to receive 3,000 bags of rice.

Already, Nasarawa State, where the party’s National Chairman, Mr Abdullahi Adamu, comes from has received its share on Friday with 3,000 shared across the state for the Sallah feast.

Some states billed to receive the bags of rice are Katsina, where the President, Mr Muhammadu Buhari comes from, Kebbi, where the Chairman of APC governors’ forum, Mr Atiku Bagudu comes from, Yobe where the former caretaker Committee of the APC, Mai Mala Buni comes from and Kaduna State, one of the states with the highest voters in the north.

However, an aide told THE WHISTLER “the bags of rice are basically for Holy month of Ramadan and not for political reasons.”

Tinubu, who was represented by the Nasarawa State Coordinator of the Asiwaju Bola Ahmed Tinubu Campaign Organisation, Yusuf Omaki, while distributing the bags in Lafia, urged the beneficiaries not to sell the rice but to use it for the purpose it was meant for.

He said it was a gesture that was aimed at improving on their standard of living.

“This gesture is to provide succour to the people, especially the less privileged in Nasarawa State, ahead of this year’s Eid-el-Fitr celebrations.

“I want to also use this opportunity to call on all Nigerians to scout out for competent leaders ahead of next year’s general election so as to curb the socio-economic challenges undermining the development of the country.

“So, I am soliciting the support of the APC members and all Nigerians to enable me succeed in my presidential ambition.

“The 3,000 bags of rice allocated to Nasarawa State would be distributed to socio-cultural organisations, religious bodies, professional groups and the APC party stalwarts.”

It could be recalled Tinubu had distributed specially branded bags of rice in Kano in 2021 and followed that up with further distribution in Lagos, Katsina and other parts of Northern Nigeria.