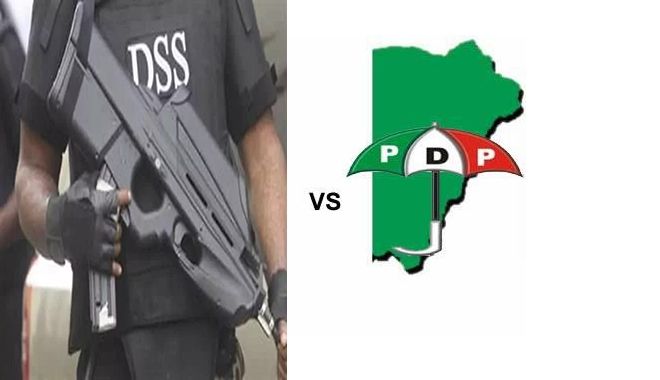 Chairman of the PDP Governors’ Forum, who is also the Governor of Ondo State, Dr. Olusegun Mimiko, spoke on behalf of his colleagues at the fourth post-election meeting held in Abuja on Wednesday night.

Mimiko described the alleged meddlesomeness of the security agency in electoral matters, which he said were capable of affecting the fortunes of the PDP at election petition tribunals, as worrisome and unacceptable.

“It is against the spirit, ethos, values and fundamental tenets of democratic norms and tradition; more so with the existence of the Electoral Act and the constitution.

“The forum is worried, alarmed and shocked by this development. A situation where officials of the Independent National Electoral Commission in these three states, (all PDP states) are daily being arrested, detained and questioned on election-related offences, even when the cases are ongoing at the tribunals, spells doom and poses imminent danger to our fledgling democracy.”

He said that the alleged interference is an attempt to stifle the opposition, adding that this action was most unacceptable.

“We insist that the trend be reversed. No democracy survives without a viable opposition in any part of the world,” he added.

The governors wondered why even in cases of under-aged voters that were reported in some states the DSS did not investigate a single person or made any arrest.

“Even in a clear case where money paid was traced to the bank account of a state Resident Electoral Commissioner, the DSS is yet to order investigation into the matter.

“INEC is supposed to be an independent commission and its officials ought to be shielded from partisanship, especially at a time when the dust raised by the alleged APC membership of the DG of the DSS, Mr. Lawal Musa Daura, is yet to settle.” Mimiko said.He advised the DSS to pre-occupy itself with the task of ensuring internal security and not involve itself in electoral matters.

Meanwhile, the 36 governors under the auspices of the Nigeria Governors’ Forum which held later in the evening, agreed to meet with the United Nations Secretary General, Mr. Ban Ki-Moon on Sunday.

According to the Chairman of the Forum, who is also the Governor of Zamfara State, Alhaji Abdul’aziz Yari, the meeting would among others issues “discuss the Sustainable Development Goals, the successor programme to the Millennium Development Goals and the envisaged role of state governors, as critical stakeholders in its implementation.”

A communique signed by Yari also urged the federal government to come up with a more comprehensive power sector policy and strategy.

Yari said that sequel to the presentation made by the Managing Director of the Niger Delta Power Holding Company Limited and exhaustive discussions on the operations of the National Integrated Power Project, the Forum resolved to appeal for a more comprehensive power sector policy and strategy, with a view to achieving a holistic solution to the power situation in the country.

Governor Yari said the meeting would be a follow-up to his (UN Chief’s meeting) May 2011 meeting with the Forum.

I Did Not Leave An Empty Treasury, Amaechi Argues