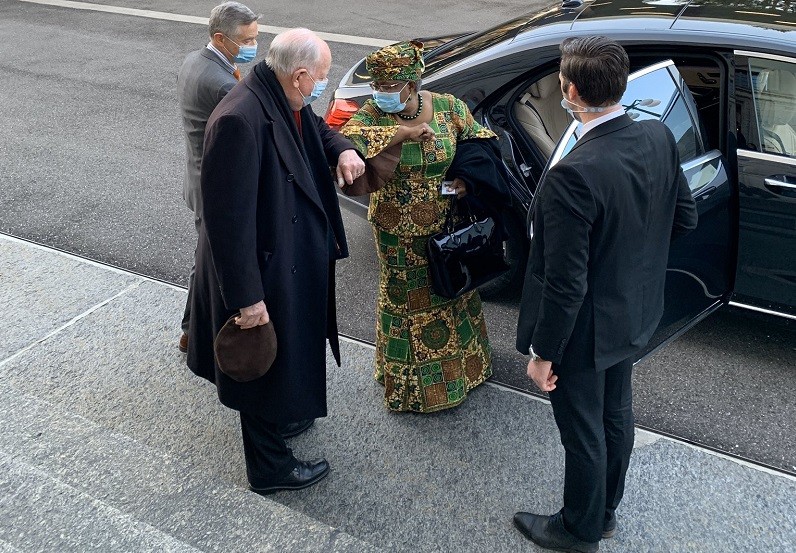 In a series of pictures tweeted by the WTO DG, she was captured being received by officials of the organization. Photojournalists were also seen taking different shots of her.

THE WHISTLER reported that the former minister made history when she was announced on February 15 as the first woman and first African to lead the WTO.

REPORT: US Cites Emergence Of Okonjo-Iweala, Others As Evidence Of Africa’s Global Importance

Meanwhile, Okonjo-Iweala shared a letter from a Switzerland based newspaper (az Nordwestschweiz / Schweiz am Wochenende) which apologized for describing her as a “grandmother”.

The headline read: “This grandmother will be the new chief of the World Trade Organization.”

Okonjo-Iweala appreciated those who signed the petition to call out the newspaper for what she called “racist and sexist remarks”.

On his part, the media platform’s Editor-in-Chief, Samuel Schumacher, said the editorial team felt sorry for the blunder.

“In our print edition of Tuesday 9 February 2021, we ran an article on the new head of the World Trade Organization, Ngozi Okonjo-Iweala. The article also appeared in our online edition and in two other newspapers, Luzerner Zeitung und St. Galler Tagblatt, and their online editions.

REPORT: US Cites Emergence Of Okonjo-Iweala, Others As Evidence Of Africa’s…