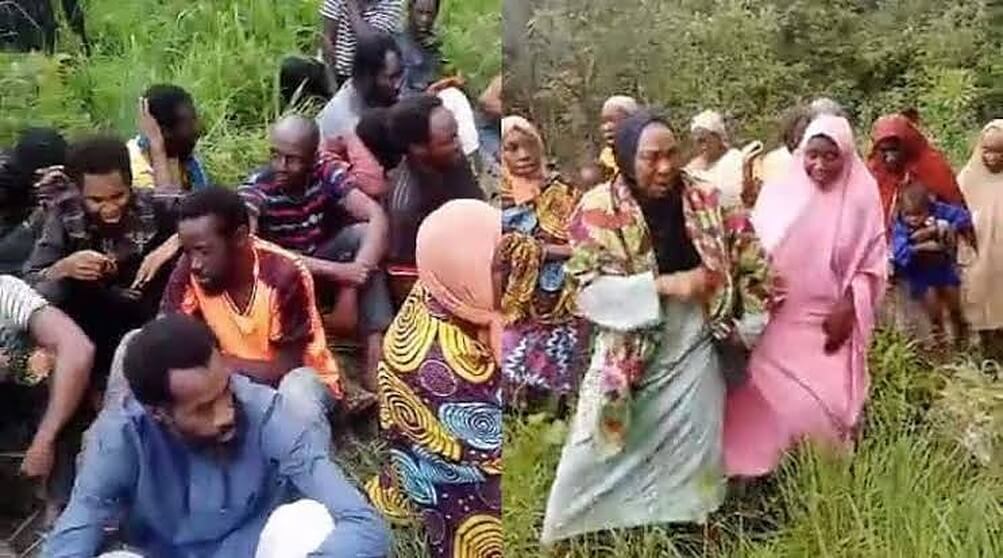 A new video released by terrorists that kidnapped the victims of the Kaduna – Abuja train attack has shown how the abducted victims were being assaulted and flogged amidst tears and agony.

The victims were seen in the video begging their oppressors as they were indiscriminately whipped by unmasked and masked men, who surrounded them.

The video also showed the women watching in agony.

Addressing the federal government, a representative of the terrorists threatened to enslave and sell some of the victims if their demands are not.

“This is our message to the government of Nigeria and just as you have seen these people here, by God’s grace, you will see your leaders; your senators and governors will come before us.

“These ones you are seeing here, we will keep some as our slaves and sell them off just as our Imam told you in the past.

“Just like the Chibok girls that were sold off, we will equally sell these ones as slaves. If you don’t adhere to our demands, we will kill the ones we need to kill and sell the remaining. By God’s grace, El-Rufai, Buhari, we will bring you here”.

Pleading to the government, one of the victims called on the international community and the United Nations to intervene and facilitate their release.

He stressed that the captors were not willing to be lenient any further and as such, the government should meet the demands of terrorists in exchange for their freedom.

On March 28, terrorists abducted at least 63 passengers from an inbound Kaduna – Abuja train.

They revealed that the abduction was not financially motivated, but for the release of some of their commanders incarcerated in various facilities of the government.

However, reports have shown otherwise as 13 victims who were earlier released on different occasions were said to have paid huge ransoms for their freedom.

THE WHISTLER had authoritatively gathered that the terrorists have demanded N100m each for the release of the victims.

The last released seven had paid no less than N800m.