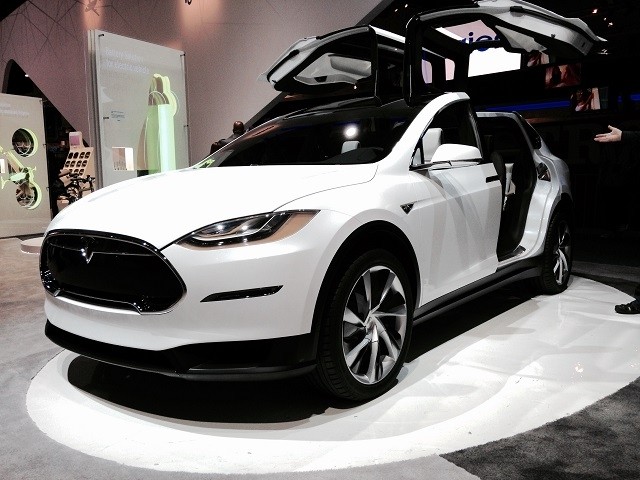 Tesla Motors delivered the first of its long-awaited Model X electric sports-utility vehicles, on Tuesday night, near the company’s California factory, as it tries to become the world’s first mass-market electric car-maker.

CEO Elon Musk says the Model X sets a new bar for automotive engineering, with unique features like rear falcon-wing doors, which open upward, and a driver’s door that opens on approach and closes itself when the driver is inside.

“All these things together make the car amazing,” he said.

The Model X is the third vehicle from 12-year-old Tesla, it’s an all-electric SUV with seating for up to seven passengers. It has that dual-motor setup that enables ludicrous speed, with ludicrous mode enabled, the Model X could go from 0-60MPH in 3.2 seconds. It makes the Model X the quickest SUV by a significant margin.

The Model X has three rows and seats seven; on a test ride, the back row could fit an adult and had a surprising amount of headroom. The front windshield, which Tesla says is the biggest in the industry, sweeps back and over the front seats. Navigation, music and cabin controls are accessed through a 17-inch dashboard touch screen.

But the most eye-popping feature is the double-hinged falcon-wing doors. They need less than a foot of clearance to open, and they’re fitted with sensors so they won’t trap hands or hit cars parked next to them.

The doors also know how much room they have to open. These aren’t normal ultrasonic sensors, though: there’s no black plastic dots, which are normally needed for those sensors. Instead, Tesla has used black magic (and, fine, physics) to make sensors that can see through metal.

The doors and the Tesla-designed second-row seats, which all move independently—were among the reasons the Model X’s launch was delayed several times. Tesla announced plans for the Model X in 2012; it was initially expected to go on sale in early 2014.

The CEO said the company “got a little carried away” and might have designed the Model X differently if it had known the final engineering costs and manufacturing complexity.

“I’m not sure anyone should make this car,” he said.

“There’s far more there than is really necessary to sell the car.”

The Model X scores five stars in every category. According to Elon’s pretty graphs, this means you’ve got a 6.5 percent chance of being injured in a high-speed accident.

The safety smarts come from the design of the car: not having an engine allows Tesla to re-engineer the car, making a much larger front-impact crumple zone, and great strength for side-on impacts. A low center of gravity means that you probably won’t roll the Model X over, and even if you do, it will land on its feet.

The company has not disclosed pricing for the base model, but Musk said that in the future, there would be a “lower-cost” Model X.