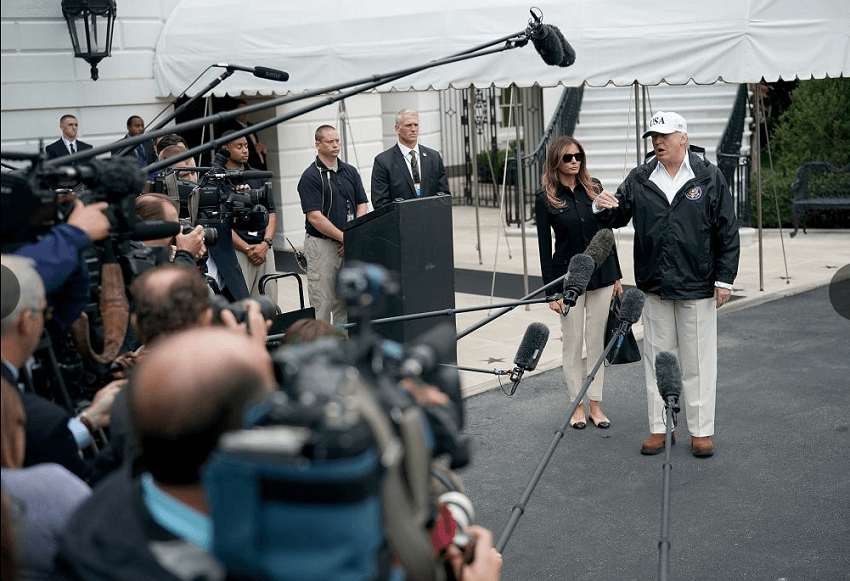 U.S President Donald Trump has arrived in the Hurricane ravaged state of Florida to meet people affected by the Storm.

Mr Trump arrived the southeasternmost state, alongside his wife Melania and Vice-President Mike Pence on Thursday.

Am leaving now for Florida to see our GREAT first responders and to thank the U.S. Coast Guard, FEMA etc. A real disaster, much work to do!

During their brief trip, President Trump and wife met with state and local leaders, visited a mobile home park damaged in the storm, handed out meals to Hurricane Irma survivors, before heading back to Washington.

Hurricane Irma was one of the most powerful Atlantic storms on record. It stretched 650 miles from east to west, pummeled at least nine states — deluging streets, knocking over trees and destroying homes along the way.

Before the hurricane smashed into the US mainland over the weekend, it struck northern Caribbean islands, leaving at least 44 people dead, authorities said.

Residents in Florida are slowly returning to find ruins in some of the hardest-hit neighborhoods, after Hurricane Irma tore through the state and left millions without power.

Recovery is only getting started, and some areas remain flooded. Utility companies are working to restore power to the battered Florida Keys. About 2.6 million utility customers still were without power in the state Thursday morning, officials said.

The hurricane reportedly killed more than 55 people in total. Reacting to the number of casualties, Mr Trump said: “When you think of the incredible power of that storm, and while people unfortunately passed, it was such a small number.

“People thought thousands and thousands of people may have their lives ended and the number is a very small number, which is a great tribute to you.”