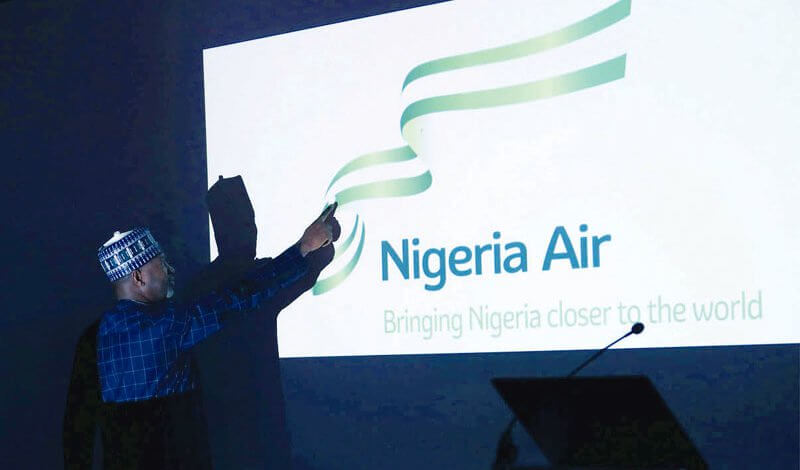 In what will leave most Nigerians stunned, the Federal Government has suspended the National Carrier, Nigeria Air, procurement indefinitely.

The Minister of State Aviation, Senator Hadi Sirika disclosed this on Wednesday in Abuja after the Federal Executive Council meeting presided over by President Muhammadu Buhari.

The airline was launched during the Farnborough Air Show in London in July.

Sirika speaking at the event said, “I am very pleased to tell you that we are finally on track to launching a new national flag carrier for our country, Nigeria Air. We are all fully committed to fulfilling the campaign promise made by our President, Muhammadu Buhari, in 2015. We are aiming to launch Nigeria Air by the end of this year.

“We obtained the Certificate of Compliance from the Nigerian Infrastructure Concession Regulatory Commission two weeks ago and can now go into the investor search. I am confident that we will have a well-run national flag carrier that is a global player, compliant with international safety standards and one which has the customer at its heart.

“We hope to establish an airline that communicates the essence of our beautiful country; an airline we can all be proud of.”

But announcing the suspension, Sirika did not offer any reason why.

A terse statement by the ministry quoted the minister as saying, “I regret to announce that the Federal Executive Council has taken the tough decision to suspend the National Carrier Project in the interim. All commitments due will be honoured. We thank the public for the support as always.”

There were doubts about the commitment and transparency of the FG about the project.

One of those who doubted the sincerity of government is Capt. Yunusa Kazaure, a former pilot with Nigeria Airways.

Kazaure insisted that for the government to set up a new national carrier for the country, it should not be more than nine months and wondered why the government was yet to do so almost three years later.

Kazaure declared that from all indications, the government lacked the will to set up a new national airline for Nigeria, stressing that the engagement of transaction advisers by the government was a wrong step, which would not achieve its desired results.

Also, Mr. Taiwo Adenekan, another staff of Nigeria Airways and the Managing Consultant, PTD Consulting, said the country may not have another national carrier any moment soon unless some issues were addressed.

Adenekan also observed that the plans would fail again unless the government pays off the outstanding benefits of the defunct carrier.

He insisted that any attempt not to pay off the former workers before the reestablishment of a new one would lead to labour crisis, which might not augur well for the country.

He said: “Can the government establish a national carrier without paying off the Nigeria Airways staff, which is very crucial? It can lead to a lot of labour issues and frustrate the Federal Government because those are the pioneer people that started aviation in this country and they should be paid.

“Federal Government should address that and ensure that the staff are paid off before they can start on a clean slate.”

‘I Knew Ciara Was Sampling My Record’ – Tiwa Savage