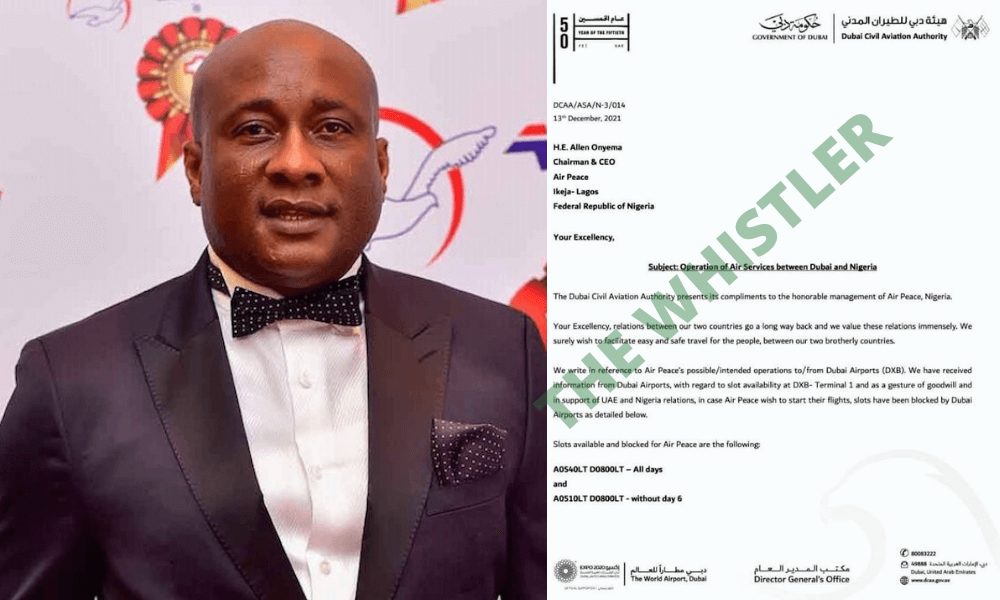 The government of the United Arab Emirates has made a U-turn to avert a diplomatic row with Nigeria, following threats by the Federal Government to ban Emirates Airline from coming into the country.

The development was contained in a letter from the UAE General Civil Aviation Authority and sent to Air Peace on December 13, 2021.

Nigeria had taken a decision to slash Emirates 21 flight slots to one over unfair treatment meted out to Air Peace.

THE WHISTLER had exclusively reported that the Federal Government considered the treatment as an ‘insult’ on Africa’s biggest economy.

But after Buhari took over office in 2015, it was learnt that the flight frequency rose from 14 to 21 following a Bilateral Air Service Agreement between both countries.

Under the BASA, both countries are expected to operate 21 flights each.

The Middle East country has not met its part of the agreement. It only granted Air Peace one slot out of three applied.

It also denied the Nigerian airline access to operate at the Dubai Airport as Air Peace has no option than to operate at Sharjah Airport.

But following FG’s sanction which took effect on December 12, 2021, the UAE’s Civil Aviation wrote Air Peace extending its slots to seven with access to Dubai Airport.

UAE said, “We write in reference to Air Peace’s possible /intended operations to/from Dubai Airport (DXB). We have received information from Dubai Airport, with regard to slots available at DXB- Terminal and as a gesture of goodwill and in support of UAE and Nigeria relations, in case Air Peace wishes to start their flights, slots have been blocked by Dubai Airport as detailed below.

Supreme Court Justices That May Retire Before 2023 General Election