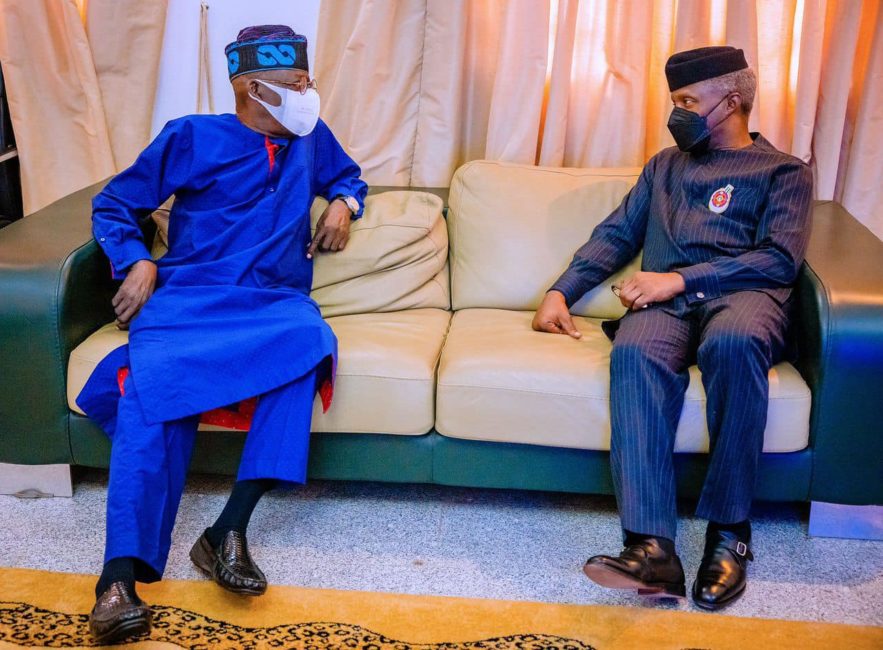 As the camp of the Vice President, Mr Yemi Osinbajo, comes to terms with the declaration for the office of the president by Mr Bola Tinubu, the National Leader of the All Progressives Congress, his loyalists have downplayed the declaration saying they are not bothered.

While Tinubu’s declaration did not come as a shock, Osinbajo’s loyalists are however unhappy that the former Lagos State governor did not show him due respect.

Even as Osinbajo has not declared his intention to vie for the office of the president and has not made any statement concerning his Tinubu’s Monday declaration, his loyalists feel that as vice president, Osinbajo deserve first right of refusal.

This is, as sources told THE WHISTLER that Tinubu had informed Osinbajo as a mark of respect before voicing out his intention.

Speaking what appears to be the mind of the Vice President following Tinubu’s declaration on Monday, the Progressive Consolidation Group, PCG, in a statement signed by Mr Aliyu Kurfi, brushed aside the development saying Osinbajo was still in the race.

Reacting on Tuesday, Kurfi noted that plurality of candidates and political parties are necessary for a robust democracy and a rich array of strong contenders will only deepen the legitimacy of Osinbajo’s eventual victory.

He said,
“As genuine democrats who believe in the Progressive ideals that Osinbajo stands for, we welcome others into the race because we strongly believe that a plurality of candidates and political parties only enhances the robustness of our democracy.

“Every well-informed Nigerian knows that PCG is the very first 2023 support group to be formally recognised by our progressive party, APC, and we have never sought to prevent or discourage others from following in our footsteps because Vice-President Osinbajo will not subscribe to dirty political games that some typically desperate politicians play.

“We are mobilising for Osinbajo, a man who believes in the rule of law, a man who is a democrat and a great progressive too; nothing in his antecedents ever speaks of anti-democratic standards.

“Therefore, we do not only welcome the declaration by an aspirant; in fact, we anticipate having half a dozen more, so that Osinbajo would emerge from a very rich array of choices offered to the nation by the APC.

“The nature of the political competition that we envisage shall be one characterised by politics without bitterness; to this end, all members of pro-Osinbajo groups have been instructed to address other aspirants with courtesy and avoid getting drawn into the usual mudslinging that characterised Nigerian politics.

“As to the chances of success, we are very confident that Osinbajo will enter and win the race by virtue of all his good qualities and citizens’ expectations to see him build on the foundation laid by President Muhammadu Buhari.”

Tinubu had on Monday while visiting President Muhammadu Buhari declared to the waiting State House correspondents his intention to vie for the office of the president.

He said it was his long held dream to be president, adding that he had been a kingmaker but now wants to be the king.

While the Ohanaeze, the apex Ibo socio-cultural group vehemently advancing the Igbo presidency in 2023 quickly carpeted Tinubu, describing his intention to contest as an injustice and an affront on the people of the South East, Ebonyi State Governor, Mr Dave Umahi has also declared on Tuesday while visiting the president.

But while some highly placed sources and allies of Tinubu have said the vice president will not contest against his former boss, Osinbajo’s loyalists have insisted that he would run.

This, according to Kurfi, is what makes politics interesting especially in a plural society like Nigeria.

Over 1,800 MT Of Rice Released Into Abuja Market to Tackle Food Inflation—Minister

Why Is Amaechi Still In Office Despite Misleading The President And Breaching Oath Of Office?