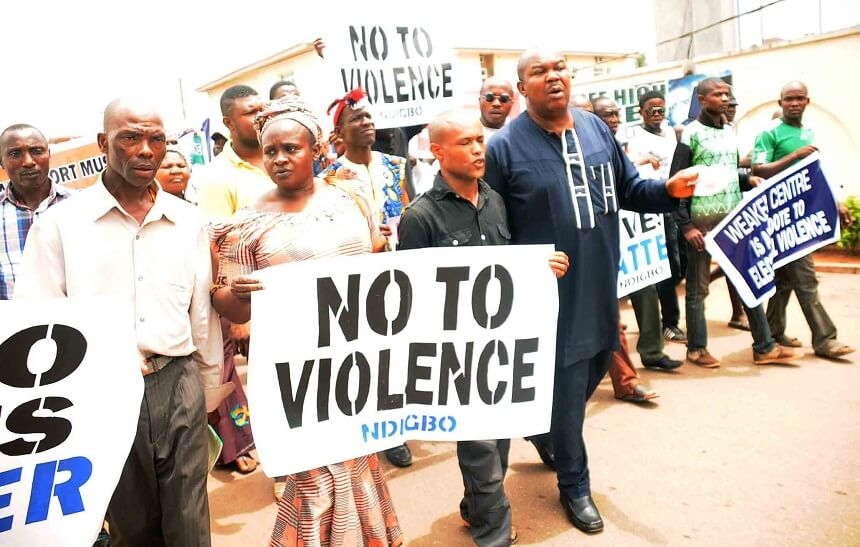 Upon receiving Tuesday`s threat by a coalition of northern groups, the Igbo Youth Movement (IYM) says it is prepared to confront “war mongering northerners“ who may be targeting their property in the region.

The groups had given the Ndigbos three months notice to exit their land.

But in a statement on Wednesday by its founder, Evang Elliot Ugochukwu-Uko, the IYM described as childish, the ultimatum given its people to leave the region.

Ugochukwu-Uko said the Igbos would have taken the threat by Arewa Youth seriously if it had written the National Assembly to call for a referendum instead.

“The statement from a hitherto unknown northern group is primed to deliver a message to the whole world that some people prefer bloodshed to peaceful restructuring of Nigeria.

“The non-existent group merely represents an attempt by the sectional security apparatchiks to intimidate the struggle to reconstruct Nigeria, in their blind and unintelligent attempt to sustain the clearly unworkable status quo.

“If they were serious, they would have addressed the FG to grant Biafra freedom to secede, but they are childishly targeting Igbo property in the North, without advancing total complete split of the country.

“Igbo property in the North have always been used to blackmailing our people, while the mindless oppression continues.

“We therefore plead with this unknown group to write to the National Assembly, northern leaders and the United Nations, to as a matter of urgency, grant a referendum on the future of Nigeria. That way, everybody will take them serious.

“Targeting our properties in the North do not frighten anybody, we are used to that. We beg them to amend their childish statement to demand for an early referendum.

“That would make more sense. Our people are living in hell already. We are not scared of war mongering northerners; Referendum is the way to go,” the statement read.

Meanwhile THE WHISTLER reports that the Yoruba socio-political group, Afenifere, has called on northern elders to call youths from the region to order.

“Carrying out their threats would be a prelude to another pogrom. These elements have over the years showed their propensity to attack people, but like the Chinua Achebe said, they are holding a knife to the tiny rope that still holds the country together.

“I hope that if they still have elders, their elders should call them to order, otherwise, it may be the beginning of the end of Nigeria, as we know it,” Afenifere had said in a statement on Wednesday.

Middle Belt Distances Self From North, Offers To Accommodate Igbos

Buhari Govt Not In Touch With Reality, Says Afenifere

‘I Learnt Of My Husband’s Death On Whatsapp From Someone In U.S.’

Restructuring: Buhari Will Not Succumb To Threats, Undue Pressure