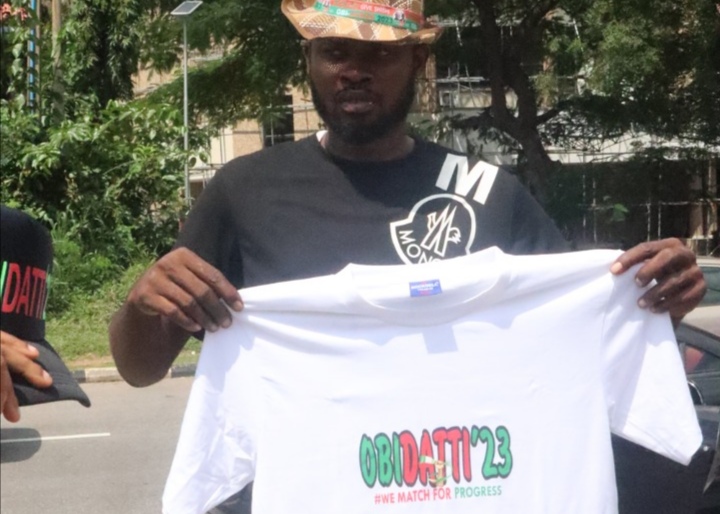 Amid the fanfare and excitement that characterised Saturday’s million-march rally for Peter Obi, presidential candidate of Labour Party in the 2023 general election, THE WHISTLER observed that some vendors took advantage to sell merchandise branded in Peter Obi’s name to the mammoth crowd at the rally.

The items which ranged from branded T-shirts to mufflers, flags, caps and  even consumable food items, got high patronage from participants at the rally who gleefully adorned them as they proceeded with the march.

Some of the businessmen who interacted with our correspondents during the rally, however, promised to donate part of the proceeds to Obi’s presidential campaign.

Emmanuel Kanayo, who came from Jos to sell T-shirts branded in Obi’s name, said it was unusual for people to buy branded merchandise of politicians with their hard-earned money as they prefer to get them for free.

“My name is Emmanuel Kanayo from Anambra state, I came all the way from Jos, Plateau State to come and participate in the march and to sell these t-shirts and caps to make a living for myself.

“We have never had an opportunity like this in this country, where youths come out and sell our product and the citizens are using their money to patronise us, I think this is the first time we are having this kind of opportunity, other parties come out and share them,” he said.

Asked if he would donate a portion of his profit to Obi’s campaign, Kanayo said, “Yes this is totally Obi, because I’m Obidatti as a person, I’m doing this not just for myself but for the country at large.”

For John Dominic, a Jikwoyi resident in the outskirts of Abuja, branding merchandise in Obi’s name is a way of showing support for the LP candidate.

“I’m here because of this rally and the country is getting out of hand. So, we want to do this now against the 2023 election. This business is to show that I’m really supporting this party. I only collect money I used in producing and I am not profiting from it.

“Notwithstanding, I will donate to Obi’s campaign, as you can see I have been under the sun. I am into fashion. I want Obi to build the country, the masses are suffering and we have suffered enough,” he added.