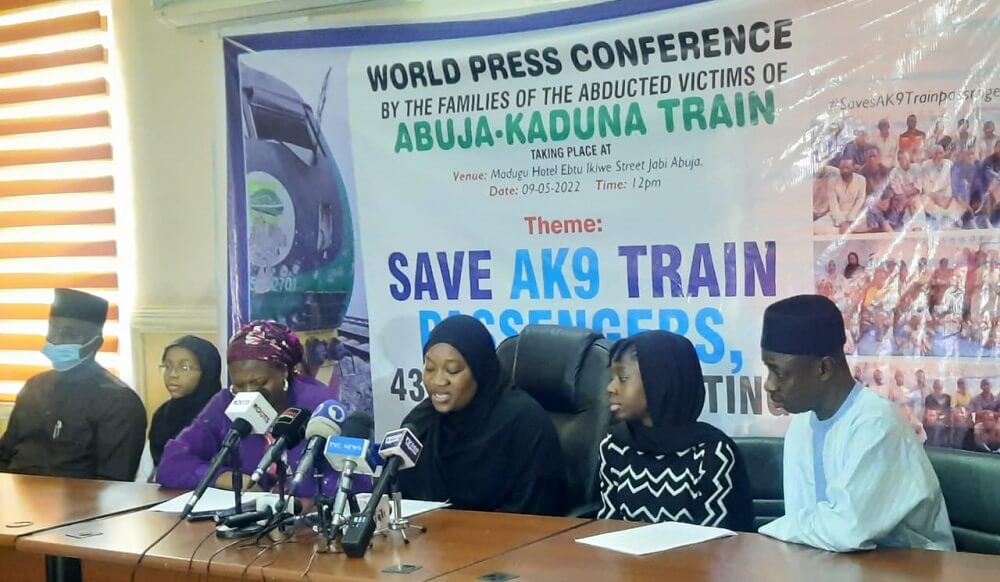 Forty-two days after the attacks by terrorists on the Abuja-Kaduna train, families of Abducted victims have again converged to lament the negligence of the Federal Government to rescue the victims from the den of terrorists.

The families of the passengers that were abducted by terrorists on March 28, said on Monday in Abuja that they will not allow train services to resume until those in captivity are rescued.

Their meeting in Abuja is coming a week after President Muhammadu Buhari directed the Nigeria Railway Corporation (NRC) to establish a Situation Room to give a minute-by-minute account of rescue efforts to relatives of kidnapped passengers.

Speaking during the press conference, the families said, “NRC has neither contacted the relatives of kidnapped victims nor established any Situation Room as directed by the President”

The families insisted that the NRC remains out of service pending when the abducted passengers are released.

They urged the Federal Government to “quickly rescue our family members held hostage.”

The families added, “Abuja-Kaduna Train Service should not resume until the first prayer is met, and adequate security measures are put in place to guarantee the safety of prospective passengers. This position aligns with the prayers of the majority of Nigerians”.

Recall that terrorists had attacked a train en-route to Kaduna, killing eight passengers while 26 got injured from bullet wounds. The terrorists, however, kidnapped no fewer than 62 passengers.

But while fielding questions from journalists, another representative of the family, Idayat Yusuf told the press about the effort they made to reach out to the NRC and Minister of Transportation, Rotimi Ameachi after the president’s directives.

She said, “We contacted the NRC and when we went to their office in Idu, we were directed to go to the Managing Director Railway. We tried to meet up with him, but all efforts to speak to him failed.

“He practically dodged us, so we spoke to Mr pascal, the manager of the railway and we explained to him that they haven’t even reached out to us.

“Pascal told us that two of the directors were coming from Lagos, to set up the situation. room. He told us that they are with the minister in a meeting and he was going to get back to us after the meeting.

“Yet, we haven’t heard anything. We even wrote the Minister (Transportation), and he hasn’t responded. We called Pascal again, and he told us they will get back to us.

“They are playing politics with the lives of the abducted passengers. They should be quick in their action, we don’t know why they are slow in executing the directive of the President. We are pleading that they obey”.

The families revealed that among those in captivity are a three-year-old, four other minors, a pregnant woman, lactating mother, and an 85-year-old great grandmother.

The families expressed hope that the President alongside security agencies were working assiduously to expedite the safe release of their loved ones.