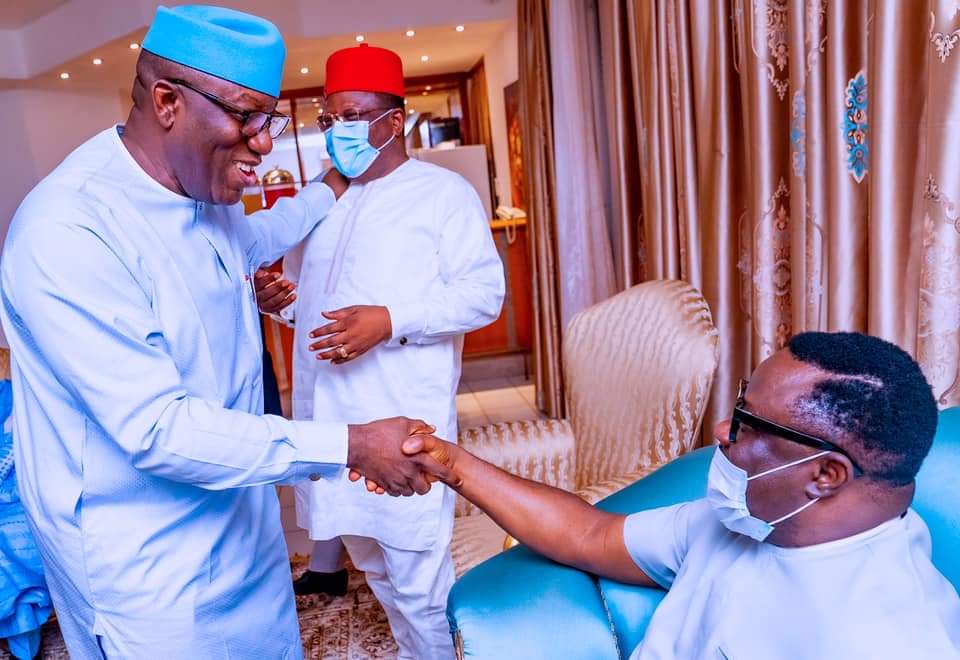 Leading presidential aspirants of the ruling All Progressives Congress, APC, took turn to appeal to the delegates for the last time at the Abuja convention centre on Tuesday night.

Even though each of the 23 aspirants was asked to speak for 5 minutes, none observed the rule.

However, the key aspirants challenged the delegates in their different ways.

Tinubu left no one in doubt that he’s prepared for the job.
He said, “We have waited and worked hard for this day to come, now it is upon us, we must rise to the occasion as we now stand before all Nigerians

“We have always said this party may well be the last best for Nigerian to attain its finest destiny.

Thus we shall use this convention to show the world that APC celebrates democracy by faithfully participating in it.

“To the delegates, this is very important. I know you will meet this event with the seriousness it deserves.

“This primary season has been one of intense competition among those who aspire to emerge. I commend all for the dignity and zeal with which they have conducted their campaign. Such strong and persistent commitment will make us strong as a party.

“We must emerge today as unified force on the common cause and shared victory.

“The candidate must have the experience, leadership knowledge and extensive personal contact to steer Nigeria through this period in this dynamic period.

“All candidates are all good men and women but I sincerely believed I am the man this challenge called for.

“I am a serious man with a serious purpose and I will use all that I know and all my ability to benefit my people. I am a unified leader. I have constructed a formidable electoral platform that has won election after election.

“I stepped forward because I can lead the party to victory.”

He said he has expertise in key fields which makes him unique among all other aspirants, and giving him the requisite skill to accelerate progressive reforms that will change the national economy.

“Let me be the man who can best articulate the vision and development and articulate it and honour all the promises of the APC, the promises we made to Nigerians. I honestly asked you to nominate me as a competent person ready to start from day one.

Lawan said he will follow the foot steps of President Mohammadu Buhari to tackle insecurity.

“I will adopt the same system you used to defeat Boko Haram to fight new wave of security challenges in the North West.”

Ayade highlighted his achievements in Cross River State in the area of building cottage industries, national unity and fighting insecurity.

He said the key tripod which his administration will base its approach will start with insecurity.

“I will deploy technology to fight insecurity. With the collapse of Afghanistan and Libya resulting to the migration of ISWAB and ISIS to Nigeria to ungoverned places, I will fight it with vigor.”

He said he will use the template in Cross River State to change the face of Nigerian economy for food.

On national unity, Ayade said, “I am the only Govenor who did not sign the anti-grazing law,” to ban nomadic herdsman from grazing cattle.

Umahi used his performance in Ebonyi State as the basis to seek for votes from delegates.

He said, “I have proven in Ebonyi State that we can achieve a lot from few. I built Ebonyi State.

“A time like this, we should give time for a professional engineer.

“I built the best health facility in Nigeria in Ebonyi State. I have some of the best schools in Ebonyi.

“In the area of national unity, I have the desire to put South East in national politics. That’s why I moved to the APC.”

He banked on his experienced and the role he played in the formation and registration of the APC.

Most importantly, he said, “I will offer free education to secondary school level. Education will be financed by Science, Technology and entrepreneurship.

“We will ensure we allocate a minimum of two per cent of our economy to Science, Technology and Entrepreneurship.”

He added that adequate funds would be made available for job creation in the country to employ youths.

He said the youths need to get busy to enable his government solve key challenges in the health sector, education and other areas.

He added that he will “establish a ministry of national unity and values to bring discipline into our country.”

He said experienced people have brought Nigeria to where it is today.

“Many of these contestants, time will tell when the EFCC come after them,” he said blaming the woes of the country on corrupt people.

“Vote for me and vote for the future of the country,” he charged the delegates.

I am the most experienced of all the candidates.

I was elected speaker of Rivers State House of assembly.

I was chairman of states speakers of Nigeria.

I became governor of Rivers State and served for two terms. I was elected chairman of governors forum twice.
“I was appointed minister of transportation and served twice.

“I was appointed director general of your(Buhari) campaign, again i served twice.

I led a campaign to remove a sitting president from power.

Harped on his experience which he said cuts across “the Executive, Judiciary and Legislative.”

He said he built education system in Imo State, and being in the race for the poor.
He added he was made before politics unlike those who made it while being in government.

“All those sharing money to delegates, if they give you, please take it, it’s your money, because it’s government money.”

I will build on the legacy of Buhari.

The Vice President lauded the current administration declaring he will not be learning on the job.

We can “establish the best industry in Nigeria. We can establish gold precessing in Zamfara and Osun.

“We can open up steel plant in Kogi. We can establish the biggest petrochemical plant in the Niger Delta.

“We can sell fertilizers to the world.
We can sell shoes to the rest of Africa. We can manufacture weapons for our use” and export.

“In two decades, we can become the first nation in Africa to send first astronauts to the moon.

“We can save our country from terrorism.

“We can secure jobs for the youth. We can give women equal education ,” Osinabjo said.