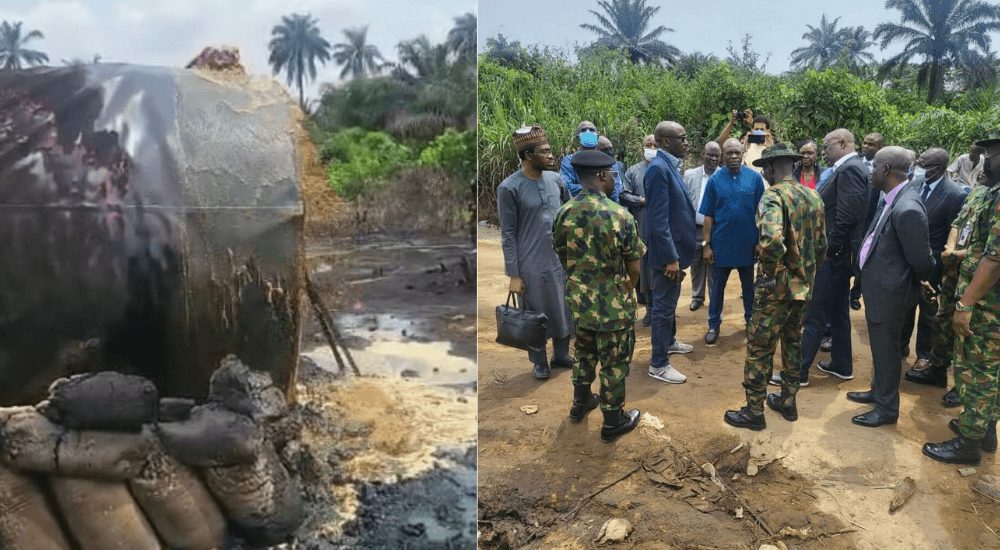 To say that crude oil theft is having a negative impact on the Nigerian economy would be stating the obvious. Crude oil theft in the oil rich delta region of Nigeria is one that has got everyone worried about the economic sabotage being perpetrated by unpatriotic machineries who illegally appropriate both crude and refined oil products from the oil facilities.

It is a cartel of anti-state forces who are hell bent on sabotaging economic interest. Beyond draining the already lean public vault, it is denying the nation of the needed resources to finance government programmes.

The criminal act is facilitated by unscrupulous elements from security forces, militia organizations, local indigenes and experienced employees of the multinational oil corporations who use a variety of methods to manipulate, loot and destroy the nation’s economic potentials.

The diversion of crude is a chain of business for many people. From the point of exploration where thousands of the product is cornered to unknown destinations, to multiple receipting of unimported number of refined petrol by some marketers, to diversion of the subsidized petrol to neighbouring countries for high profiteering, oil racketeering thrives for the cartel when Nigerians and Nigeria are left to languish in penury and want at the expense of unpatriotic elements within the system.

In addition to stealing oil from the pipelines, oil theft also occurs during the transportation of the crude oil product to the oil terminals for export. According to reports, Nigeria lost billions of dollars to crude oil theft or about 10 per cent of its foreign reserves in 2021.

This development is worrisome as it is denying the country the much-needed funding to boost economic development.

Just recently, the Chairman of Heirs Oil and Gas, Tony Elumelu gave credence to this when he said that between January and September 2021, Nigeria lost about $4bn to crude oil theft alone.

This amount, when converted based on the N416.25 official exchange rate of the Central Bank of Nigeria translates to about N1.66trn

Elumelu while speaking on the impact of crude oil theft had said, “Theft in the Niger Delta is a national menace. We (Heirs) will produce crude oil and the thieves will steal like 50,000 barrels per day.

“In my opinion, it is one of the most lethal threats to our country because there is so much money in the hands of people who don’t pay taxes and people you don’t regulate. The country is not safe.”

Apart from revenue loss, the issue of oil theft is currently threatening not only the Nigerian National Oil Company Ltd’s quest for energy security for the country, it is also having a debilitating effect on Nigeria’s revenue earnings.

The record loss of revenue to oil theft is mind bugling. A 2019 report by the Nigeria Extractive Industries Transparency Initiative said that Nigeria lost about $42bn to crude theft, as well as domestic and refined petroleum products losses from 2009 and 2018.

According to the NEITI Report, the losses include about $38.5bn on crude theft, $1.6bn on domestic crude, and another $1.8bn on refined petroleum products.

Similarly, in a Report released on Thursday during a meeting on crude oil theft between the Nigerian Upstream Petroleum Regulatory Commission and Oil Producers Trade Section, as well as the Independent Petroleum Producers Group, showed that between January 2021 and February 2022, Nigeria lost a whopping sum of $3.2bn to crude oil theft.

The amount when converted by the official N416.25 to a dollar exchange rate translates to about N1.36trn.

The Commission in the Report revealed that oil theft rose significantly between 2021 and 2022, with over 90 per cent of total crude produced at the Bonny Terminal stolen in January 2022.

Given that almost 95 percent of total exports revenue come from the petroleum products revenue in Nigeria, the federal government is worried that if left unchecked, the huge losses could have a devastating impact on the economy.

Despite being Africa’s largest crude oil producer, Nigeria has recently been struggling to meet the quota set for it by the Organization of Petroleum Exporting Countries.

While crude oil price is currently hovering around $139 per barrel as a result of the supply shortage induced by the Russia-Ukraine war, the losses being suffered from oil theft is making it difficult for Nigeria to take advantage of the surge in global crude oil price.

In a bid to arrest the ugly situation, the Group Managing Director of the Nigerian National Petroleum Company Ltd, Mr Mele Kyari, like a commander leading his troop to war, stormed the forests and creeks in the Niger Delta to get first-hand information on cases of oil bunkering and illegal refineries.

Alongside the Minister of State for Petroleum, Mr Timipre Silva, and Chief of Defence Staff, General Lucky Irabor, Kyari conducted on the spot assessment on the losses being suffered by the country through oil theft.

The tour of the Niger Delta creeks which is based on a directive from President Muhammadu Buhari is part of a wholistic strategy to deepen oil production in the country and effectively end illegal oil mining and associated threats in the sector.

Given that the factors that aided crude oil theft include inadequate security, poor community engagement, economic challenges, poor surveillance, stakeholder compromises and exposed facilities, the team which was joined by the Operation Delta Safe Joint Task Force went into the forest to see many sites where illegal refineries were being done.

Instantly, the security forces begun shutting down many sites based on the Presidential directive. The drive to end losses in the sector is informed by the government’s drive to ramp up production and boost foreign earnings for the country especially now that the Russian-Ukraine war has exposed the sector to high level of volatility.

It was in a bid to arrest the losses starring the country that Kyari designed new operational strategy involving multi-sectoral agencies, to play critical role.

Arm with the zeal to tackle the menace, the team stepped into the thick forest of Ibaa in Emeoha Local Government, where a serious message was sent to oil thieves that their days in the illegal trade are numbered.

Based on estimates gathered at the site, Nigeria loses about 1,500 barrels per day at Ibaa alone. In Rivers State alone, there are many of such illegal refineries, costing the country huge revenue earnings.

While urging oil thieves to stop their illegal activities, Kyari warned that the full wrath of the law will be brought against them if they continue.

The warning from the GMD is instructive as it points to the fact that the country cannot continue to suffer such huge losses amid needs to carry out infrastructural development by this administration.

Done with the tour of Ibaa, the NNPC GMD moved to the 146 Battalion, Finima, Bonny Island where he urged the men of the Nigerian Naval force to step up their game to quickly bring oil theft to an end.

Kyari also tasked the task force to ensure that there is zero tolerance for illegal activities across the oil and gas sector.

At the Gogokiri site which is said to be the biggest bunkering in Bayelsa, the team did not only shut down the facility, it ensured that the connection point and storage facility at Igbalele in Bayelsa was destroyed saving huge barrel for the country.

Kyari also ensured the destruction of Okarki where oil thieves had laid pipeline and tapped oil from a community in Abua community bordering Rivers State.

In another community in Rivers State called Ogoda, it was reported that brass pipeline was blasted to enable the vandals syphon crude but this has been quickly replaced by the government to ramp up production.

The GMD who was undeterred with various reports he gathered about the activities of oil thieves, stated emphatically that the bid to put an end to their activities will be relentless until the country get rid of them

He expressed optimism that the strategy being adopted will finally arrest the situation.

The GMD underscores the work of the security team, and commended them in the effort to stop those denying the country the much-needed resources.

It is believed that the multi-sectoral approach involving various agencies and community leaders and the encouragement of the operatives of the task force would finally bring to end the theft of crude oil.

Onuba, a Chartered Accountant wrote in from Abuja

JUST IN: Judgment On Governor Ayade’s Defection To APC Shifted To April 6