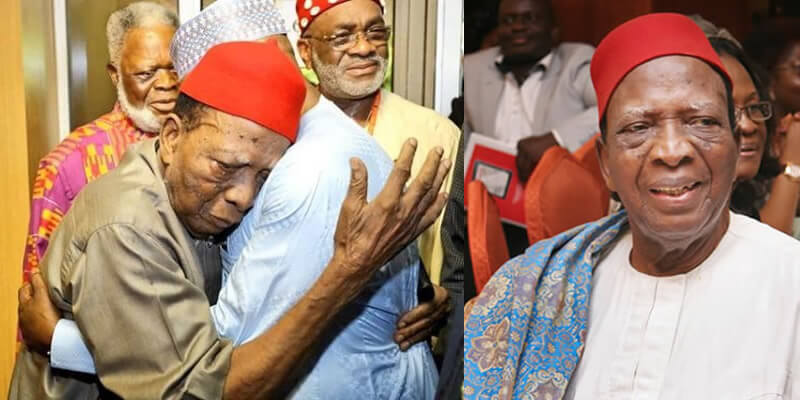 Atiku had filed the petition at the tribunal after the Independent National Electoral Commission (INEC) declared that President Buhari won the election with 15,191,847 total votes against the PDP candidate’s 11,262,978 votes.

In his petition, however, the PDP candidate claimed to have scored 1.6 million more votes than Buhari. Atiku claimed he obtained the result from a now controversial INEC server.

Who is Ben Nwabueze And Why Atiku Chose Him

One of the reasons Atiku may have chosen Nwabueze to lead his legal team to challenge the outcome of the presidential election could be that the PDP presidential candidate is already thinking of going the whole hog in the appeal process to the Supreme Court in the event that the tribunal judgement does not favour him.

The renowned constitutional lawyer is Nigeria’s first academic Senior Advocate of Nigeria (SAN) and who holds a Doctor of Laws (LL.D) from the University of London in 1978.

Nwabueze’s outstanding works in Constitutionalism, Presidentialism, and Judicialism earned him the designation as one of Africa’s most learned holder of a higher doctorate degree in Law, with over thirty published books to his credit.

The 82-year-old, on Thursday, appeared on a wheelchair before the Justice Mohammed Garba-led tribunal as Atiku’s lead counsel.

Meanwhile, INEC’s legal team at the tribunal is being led by Yunus Usman (SAN).

Mike Igbokwe (SAN) appeared as President Buhari’s lead counsel, while the ruling All Progressives Congress (APC), which is also a  respondent in the suit, has Yakubu Maikyau (SAN) as its lead counsel.

After all representatives of the parties involved announced the their appearance, Professor Nwabueze had said, “The determination of the petition will certainly impact on future elections and constitutionalism in the country,” adding that “notwithstanding of my age and attendant health challenges”, he attended the proceedings “to underscore the importance” of the case.