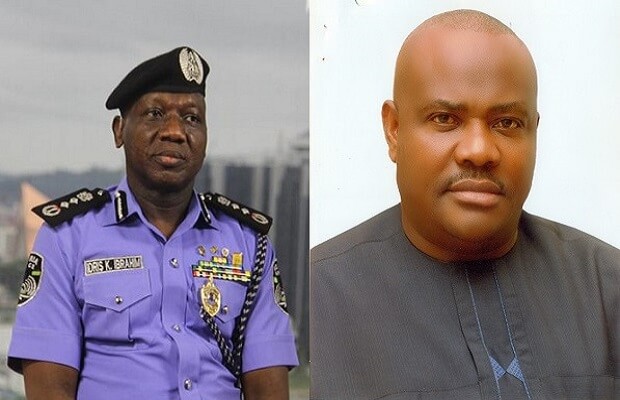 The Inspector General of Police (IGP), Ibrahim Idris, has reacted to Governor Nyesom Wike’s claim that police in Rivers are involved in most kidnappings in the state.

The WHISTLER recalls that Governor Wike had, on Wednesday, alleged operatives of the Special Anti-Robbery Squad (SARS) as being responsible for most kidnappings in the state.

But the IGP Idris, in reaction, described Wike’s statement as nonsense talk.

“If you have leaders making sweeping allegations, obviously it does not make sense. I don’t want to comment on it,” said the IGP.

“If a policeman was killed will you say he was involved in crime? I think you are mixing two different issues.

“A policeman was killed in Rivers in connection with this IPOB issue, is different from saying policemen are involved in crime. You cannot say someone that was attacked and killed is the one involved in crime,” he said.

Speaking further, IGP Idris downplayed perceived tension in the country over the recent clash between security operatives and the Indigenous People of Biafra (IPOB) in Abia and Rivers states.

The police boss said he doesn’t think there is tension in the country.

“Which country, this Nigeria? No. Nigeria does not have tension. At least you are in Abuja you have gone around there is no tension,” he told journalists after meeting with Vice President Yemi Osinbajo in Abuja.

Asked about the situation in the South East, Idris said:

“Obviously one is to deploy policemen across the country, two, we are in touch with the state governments and trying to mobilise the political leadership to be able to intervene where necessary on how to lessen the tension in the south east.”