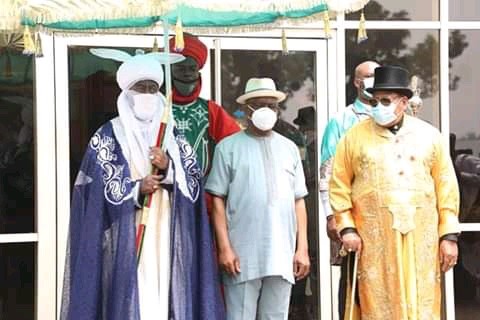 Governor of Rivers State, Nyesom Ezenwo Wike, has promised to stop Nigeria Governors’ Forum approval of a fresh withdrawal of fund by the Federal Government from the Excess Crude Account.

The governor,who said the state would challenge the planned withdrawal in court, wondered what happened to the $1 billion withdrawn from the Excess Crude Account in 2017 meant to fund the fight against Boko Haram insurgents in the North-East.

Wike disclosed this this when he hosted the Emir of Kano, Alhaji Aminu Ado Bayero, who was on courtesy visit to him at Government House, Port Harcourt on Friday.

The Rivers State governor said he would not support the plan for a fresh withdrawal except Rivers State is given its 13 percent share from the account.

“Yesterday, I was told that the governors agreed that they will take money from Excess Crude to support military. What of the one they took before, the $1billion that they gave to the military?

“Now again! This one, I will tell my Attorney General; you will have to prepare, we will go to court. I will not support that one except they will give us our 13 percent first from that Excess Crude Account, ” he stated.

The governor insisted that Nigeria belongs to everybody and no one section could assert itself over the others,adding that was why he provided conducive environment to all ethnic groups in Rivers State to coexist.

“It is important that where we are now, everybody, particularly traditional rulers, should know that they have major role to play in ensuring that peace reigns in this country.

“This is the first time in Nigeria when we have so much ethnic divide, so much religious divide. It has never happened like this before. After the civil war, people had seen Nigeria as one country. We have seen ourselves as the same people but what we are facing today is a different thing.

“We are not even talking about the issue of insecurity, but the issue of ethnicity, and religion which have taken centre stage in our life which is not supposed to be.”

The govenor accused heads of security agencies, particularly the Inspector General of Police, of politicising security by posting Commissioners of Police to the State on the order of a politician in the ruling party.

Speaking also, the Emir of Kano, Alhaji Aminu Ado Bayero, said his visit to Rivers State was part of his tour for consultation with national leaders and traditional rulers across the country.

The Emir urged Governor Wike and other regional leaders to continue to ensure that the Niger Delta region remains a welcoming environment for all Nigerians to thrive.