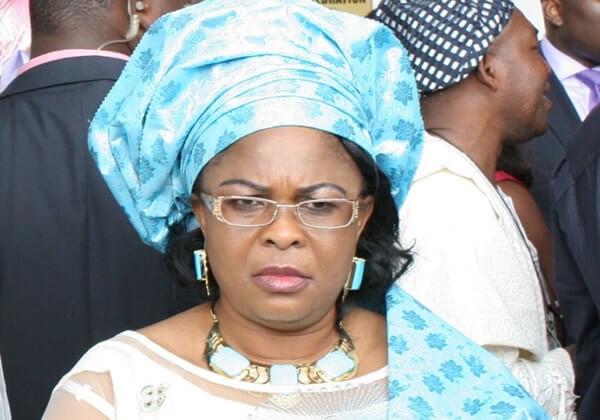 The coalition at a peaceful protest at the Lagos office of the EFCC in Ikoyi, Lagos, accused the commission of waging a campaign of calumny against the former First Lady, stating that it was uncalled for.

Leader of the group, Prince Usman Oyekan, told journalists that the EFCC has gone contrary to its claim of commitment to the principles of rule of law.

Oyekan alleged in a petition: “An Open petition by the Coalition of Yoruba Youths on the sinister plot by the EFCC to manufacture evidence against Dame Patience Jonathan, Nigeria’s former First Lady and President Africa First Lady Peace Mission,” that there is an elaborate political scheme to silence Mrs Jonathan.

“For the sake of records, Dame Patience Jonathan does not engage in fraudulent or corrupt practices as she is being portrayed by some individuals with vested interest in President Buhari’s government. This is for no other reason than to envy the rising profile of former President Goodluck Jonathan and his wife, within and outside the shores of the country.”

In his response, Executive Chairman, Head of Economic Governance of the EFCC, Mohammad Issa Rabo, denied the allegation that the commission was out on a smear campaign against the former First Lady even as he assured that the commission would do its job thoroughly without witch-hunting or persecuting anyone.

“We are talking about Patience Jonathan, we are on it and we are investigating. We do not just call somebody for calling sake, we must have carried out our investigation thoroughly, so we assure you that we shall do as you have asked, we shall look into your complaints and we shall address the issue. We shall investigate thoroughly, before investigating anybody, no enemies carried of justice, no stone will be left unturned when it comes to issues of corruption. Your petition will also be forwarded to the executive chairman.”