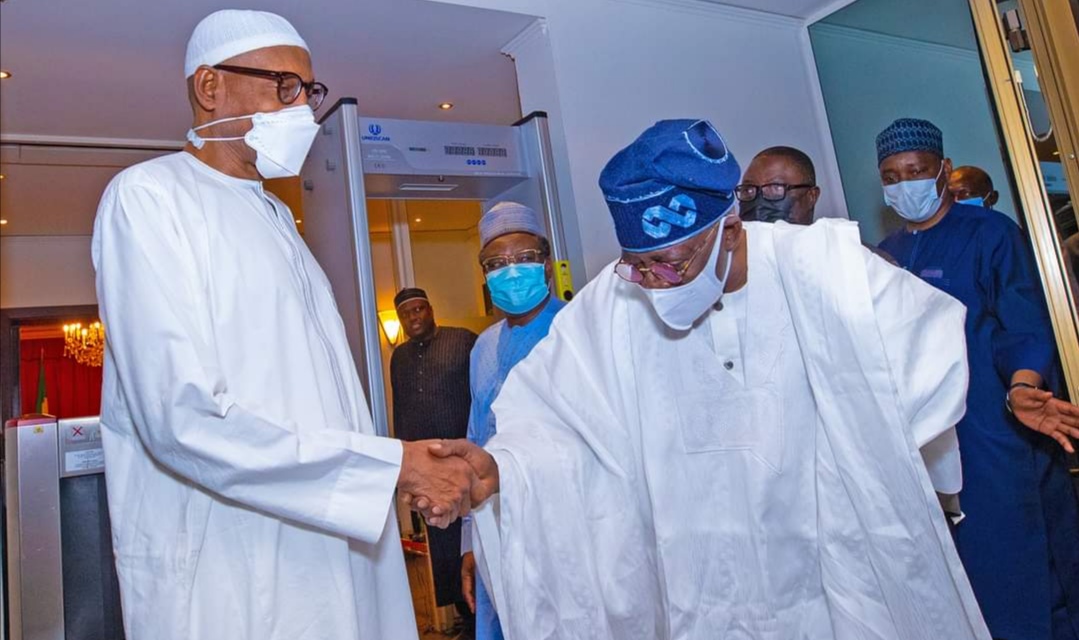 Two weeks after his emergence as the presidential candidate of the All Progressives Congress, Bola Tinubu, on Saturday, wrote President Muhammadu Buhari, describing him as a “true leader” who belongs to all but not to any particular oresidential aspirant of the party.

In a lengthy letter on Saturday, chronicling the president’s conduct in the lead up to the party’s presidential primary amid claims that Buhari preferred another aspirant as candidate, Tinubu praised the president as a friend who demonstrated a “sense of purpose, composure, and maturity”, which worked well for the party.

THE WHISTLER had reported that National Chairman of the party, Abdullahi Adamu, had announced Senate President, Ahmad Lawan, as the party’s presidential candidate anointed by the president, a move which was rejected by 14 northern governors of the party.

Tinubu eventually won the elective convention of the party contested by 14 aspirants.

Recognising the existence of likely frayed nerves despite visits to the president and the defeated aspirants, Tinubu wrote a letter of appreciation the president for not interfering with the process.

Tinubu said, while all the contestants expected the President to “choose” his successor, he simply allowed a level playing field.

Congratulating the president even as he assured him of issue-based campaign, Tinubu said, “I want to express my sincere gratitude for the very special and personal congratulatory letter you sent to me. I am deeply honored. Your words in that letter were reassuring, reenergizing, and reinvigorating.

“Your Excellency, one must admire the sense of purpose, composure, and maturity you demonstrated in the weeks and months preceding the primary elections of our great party. As aspirants and party leaders, we all pleaded with you to “choose” your successor.

“Naturally, this is expected especially in African democracy. Up until June 6, 2022, the day of the APC Presidential primaries, the whole of Nigeria, including myself, was waiting for you to announce your preferred candidate. All of us thought and believed this was a very simple matter.”

Tinubu, regarded as the National Leader of the party, said, it was only as the primary wore into the night and as the candidates spoke that he fully appreciated President’s Buhair’s position to be “neutral and non-aligned to any of us.”

“As the hours rolled by that evening, it became clear to me that all of us were your preferred candidates. As you captured it aptly in your letter to me, the “spirit” of 2013 and 2014 when we created and built APC was there for all to see.

“One by one, I saw my colleagues and partners stand on the podium, full of the same passion and patriotic zeal they had in 2013/2014, presenting their ideas on how to build on your successful legacy.

“Back then, as it is now, we were from all parts of the country, all tribes, and all religions. We all had deep personal and strong bonds with you. We were together back then and our bonds remained strong up till now.

“Mr. President, as the night of June 6 turned to the morning of June 7, I fully understood and appreciated your stance. ‘You belonged to everybody in the party and you belonged to none of the individual candidates of the party.’ A true leader, brother and friend,” he said.

He noted that his emergence was only possible through the support of the President, the delegates, party leaders, members of the Progressive Governors Forum, National Assembly leaders and members and most of the 2022 APC presidential aspirants.

“I will forever be grateful to them for shaping my political journey over the decades. I want to assure you that I will continue to work with them going forward. My emergence as a candidate is also a victory for them,” he added.

Tinubu promised to “personally engage the candidates from other political parties to urge them to do the same,” and to ensure that “Voters should elect us based on our policies, programmers, and projects.

“As candidates,” he said, “we will avoid having divisive, destructive and disruptive campaigns.”