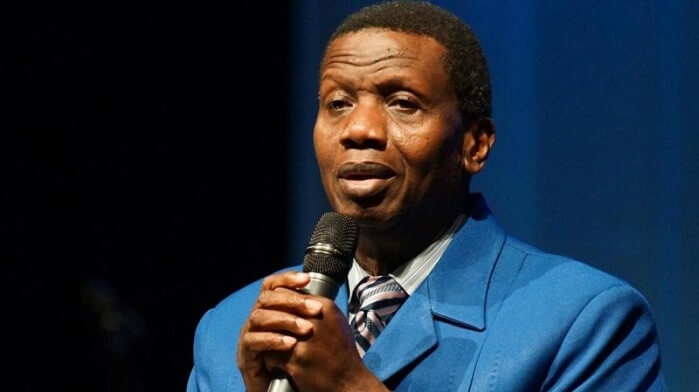 What about handkerchiefs? Well, it is just a small piece of linen, silk, or other fabric, usually square, used (especially) for wiping one’s face.

But not when it is from Pastor Adeboye, the spiritual leader and global missioner of Redeemed Christian Church of God (RCCG).

A handkerchief revolution is ongoing in that church; there is an increasing number of mirales performed with his handkerchiefs, as was the case of Apostle Paul.

At the February Holy Ghost service of the church held at its massive auditorium, called the arena, a smiling Andrew Omatsola from RCCG, Taraba province, Taraba state, stepped forward to testify proudly: “Since the hanky Daddy blessed for us landed in Taraba, it has been series of testimonies.”

He cited three examples, including a case where a relation of a man the handkerchief had healed, seized it.

Before him, a pastor had shared how a member of his church had died during his sermon without them knowing. Church closed, it was time to go home and they discovered the horrific scene. Pandemonium broke out!

But he was calm enough to remember pastor Adeboye’s handkerchief. “I placed the handkerchief on the man’s head and he came back to life immediately,” the pastor said.

A month before, Foster, a pastor from Ibadan had shared a similar experience.

“Ten days after the December, 2016 Holy Ghost Congress, I received a call from my hometown that my mother has passed on. And the news put me into confusion.

“I was crying for mercy in my house in Ibadan, when I remembered the mantle (handkerchief) I received during the Congress. And suddenly, I also remembered that one of my younger brothers in my town attended the Congress and also had the handkerchief.

“So I called him to go to our house and place the handkerchief on my mother. He said he was afraid but I encouraged him to do so.

“He went to our house and placed the handkerchief on my mother and called me that he had done that. We just had a short prayer, and to the Glory of God my mother came back to life.”

In all the above cases, the handkerchiefs were those pastor Adeboye laid hands on to anoint for his pastors to use to anoint members of the congregation. It was practically impossible for him to personally anoint the millions of people there. After the exercise, he told the pastors to keep the handkerchiefs.

There is another set of anointed handkerchiefs. That is the more awesome case. All he does is to ask the millions of people to wave their handkerchiefs, while he prays from the altar to anoint them.

Considering that some of the congregation are sometimes more than a kilometre away in the three-kilometre-by-three-kilometre arena, the transmission of anointing could be difficult to understand in the physical.

But as examples from Daddy GO below show, the handkerchiefs blessed in the air from the altar or transmitted through other means are equally potent.

Lagos: A member of the church attended one of the programmes at which handkerchiefs were anointed. Some days later he was driving to Lagos and saw a crowd gathered on the road. Out of curiosity, he came out to see, and discovered that a motorcyclist had been knocked down by a vehicle and he lay dead by the road side.

RCCG Memo: PFN Asks All Churches To Create Politics Department Ahead Of 2023

At that point, something said to him, “You have that handkerchief in your pocket, bring it out.”

He brushed aside the crowd, laid the handkerchief on the dead man and said, “get up.”

The onlookers were wondering about his sanity until they saw the man who was dead coming back to life. Not only did he rise up, the wounds had disappeared. It was a miracle, the miracle of my salvation that brought me to the level where I can wave my hand and handkerchiefs will receive power.

Port Harcourt: The Full Gospel Men International had a convention in Port Harcourt, to which they invited me to speak on a topic, “A New Anointing.”

As I spoke, I gave some examples of what God, in His infinite mercies, has done through me. Soon, it was time to go home; the crowd began to surge forward, so much such that I was smuggled into my car.

But there was a woman who decided she would touch my car if she could not touch me. So, she took out a handkerchief and dropped it on the car I was in and took it back before we could drive off.

This lady had a sister that had gone completely mad. Even though she was a little girl, it took six men to hold her down. They were happy when the woman got back because they didn’t know how to handle the situation.

“No problem, I have the solution in my hand,” she said, waving the handkerchief. She took the anointed handkerchief and laid it on her mad sister and the girl became normal again.

United States: A women came to me to say her daughter in the US was about to deliver but the doctors checked and found that the baby was too big to come out on his own. They also discovered that if she was operated upon, she would bleed to death because there was no way they could stop her bleeding.

I told her to bring a handkerchief so I could pray over it for her to take there since I couldn’t go to the US that moment. But as I was about to say one handkerchief, I said two. I didn’t know why I said that. She brought two handkerchiefs, I prayed over them and said travel quickly to the US since the doctors said they couldn’t wait for three days.

Upon her arrival there, she gave one of the handkerchiefs to the daughter, they prayed and slept. By the time they woke up they couldn’t find the handkerchiefs. It had disappeared! She was convinced then that the battle she was facing was not an ordinary one.

She thanked God there were two handkerchiefs. She then took the second one and tied it so tightly round the hand of the daughter that anyone who would take it would have to cut off the hand.

Time ticked away and the doctors said they had waited enough and that by 10.00 o’clock, they would commence the procedure because they needed to save the child, which meant that its mother could bleed to death.

POST SCRIPT: Let me admit the source of this piece. As Pastor Adeboye prayed a closing prayer for the congregation at the Holy Ghost service, a small still voice in me said, “his handkerchiefs.” Just that!

Even if I was mistaken about it, the instruction that came in that same voice as I left the church later was clear.

“Make it clear that the handkerchiefs may not work for everyone. They don’t commit heinous sin and reach out immediately for the handkerchief to perform miracles. Remember his (Pastor Adeboye’s) key success factors, holiness, obedience and faith.”

I Am A Catholic Priest, But I Wish ‘Nigerian Christianity’ Dead And…

Hate In The Age Of Charlatans

Amazon: Over 5,000 Apply As E-Commerce Giant Opens Vacancies In Nigeria