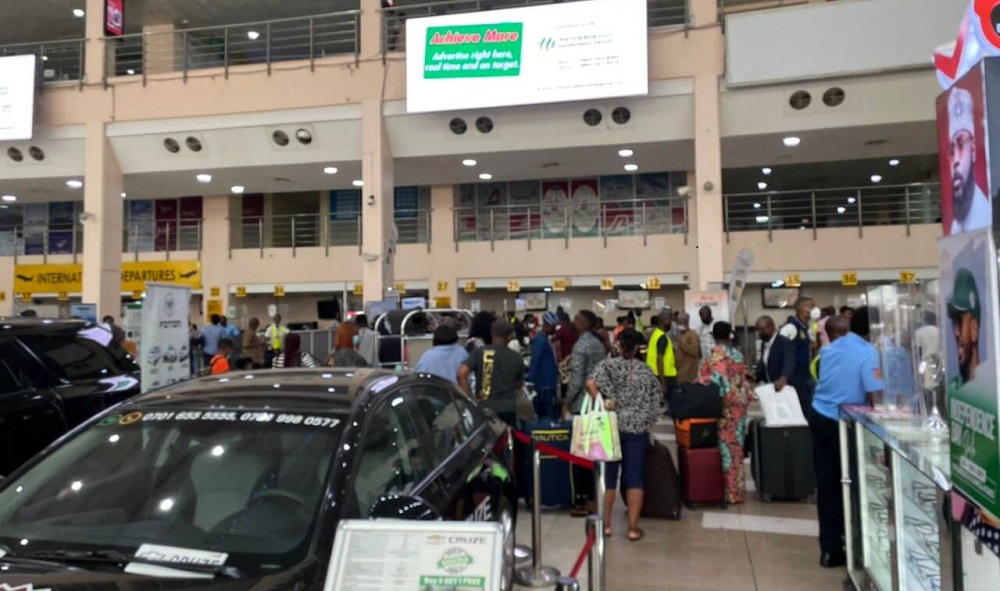 Nigerian airlines are becoming notorious for transferring the burdens of their inefficiencies on passengers who become their victims.

Airlines go to the extent of making their passengers miss important schedules as a result of delays in flight schedules or even outright cancellation without any form of compensation.

This is against the policy of government that mandates airline operators to provide compensation for passengers that are made to go through serious discomfort while travelling.

Sirika had said, “On domestic flights, delay beyond one hour, carriers should provide refreshment, and one telephone call, or one SMS, or one e-mail. They should send you an SMS or email or call you to say, ‘I am sorry, I am delaying for one hour’. “Delay for two hours and beyond, the carrier shall reimburse passengers the full volume of their tickets.

But airlines have flouted the directives given by the Aviation Minister as their customers still bear the burden of their operational glitches.

Oyebanji Isaac who is a victim narrated to THE WHISTLER how he missed his best friend’s traditional marriage which was held in Lagos due to about seven hours delay by Air Peace.

Isaac said his friend’s traditional marriage was by 2PM, while he booked an early morning flight from Lagos to Abuja.

He said, “Air Peace, there was a time I was going from Lagos to Abuja, the first time they delayed the flight for two hours due to technical issues. After that, they delayed it for another one hour.

“After that, it was delayed for another one hour. I think in total they delayed it for like seven hours. I decided I was no longer traveling since I had missed the traditional marriage and asked for refunds, but they were just speaking English.

“And it was so bad that those hours we waited, they did not even explain to anybody until the passengers got violent and caused trouble. That was when they gave us snacks.”

Lisa told THE WHISTLER at the Murtala Muhammed Airport how she missed an emergency meeting at her work place and a huge amount of money after Max Air delayed her flight for a whole day.

She said, “My flight was scheduled for 2PM. I got to the airport by 11AM on that Sunday. They postponed the flight to 3PM and later to 4PM. they had checked us in. They delayed us till 5PM with the excuse that the weather was bad but other airlines were flying their passengers.

“We stayed until 6:30PM before they announced that the flight had been cancelled. They still delayed giving us our luggage until 7:30PM. We were all frustrated because their staff were nowhere to be found. they finally moved the flight to 7AM the next day which they also delayed until 12PM.”

Another passenger Tosin Agbelemose who shared his experience said that he booked a 6PM flight with Max Air from Abuja to Lagos but got home by 4:30AM the next day.

He said when he got to the airport by 5PM, his 6PM flight was moved to 7PM. He said when it was time for boarding, passengers were merged with those who had been waiting since 2PM.

Expressing his frustration Agbelemose said, Max Air left the luggage of passengers who booked the 6PM flight in Abuja.

He said, “They told us the next flight would bring it shortly after we arrived Lagos. The bags didn’t come till 3AM the next morning.

“With no explanation whatsoever, that is how we were just sitting at the airport like refugees. It was pained me.”

Aebeh Mary also told THE WHISTLER at the Nnamdi Azikiwe Airport that she may not fly with Dana Air over the horrible experience she had with the airline.

Mary said, “The last experience I had with Dana Air, I swore never to fly with the airline. I was supposed to fly from Lagos to Abuja. Boarding was by 6PM, so when I was leaving my house due to traffic I tried to check in online about 3 hours and 30 minutes before boarding time. Their site had issues which they admitted at the counter. When I arrived, they refused to check me in even though it was at the airport early.

“The manager promised to fix me on a 6AM flight the next day. When I came back the next day, they told me that I have to pay an additional N35,000 which I coughed out.”

A passenger who does not want to be named said his experience with Aero Contractors was frustrating.

The passenger said his flight was cancelled for three consecutive days without explanation.

The passenger said he asked for a refund and was told by the airline that the fare was not refundable.

He said, “Such nonchalant attitude towards the welfare of passengers is not tolerated in the Western world, because they can be sued. But it’s different in Nigeria, because nobody has really hit them hard and taken the bold step to sue them.”