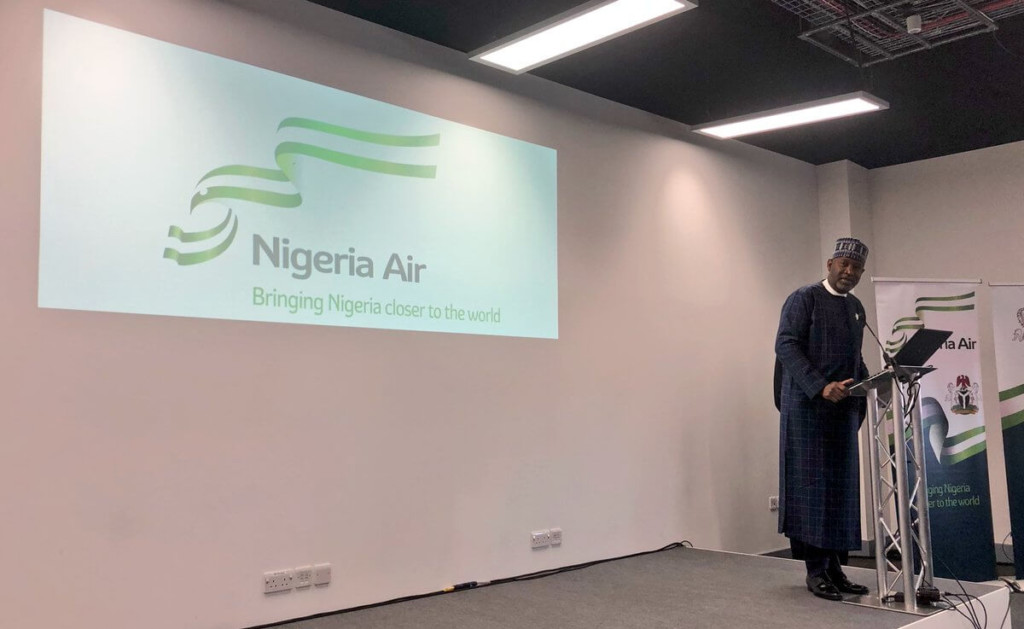 Mixed reactions on Wednesday trailed the unveiling of the name and logo of the proposed new national carrier by the Minister of State for Aviation, Sen. Hadi Sirika.

The News Agency of Nigeria (NAN) reports that Sirika had unveiled the name of the new carrier as “Nigeria Air’’ with a logo encompassing the flowing green, white and green ribbon at the Farnborough Air Show in London.

The carrier, scheduled to begin operations by December, will replace the defunct Nigerian Airways which was liquidated in 2003 by the then President Olusegun Obasanjo administration.

Ahmadu said that Nigeria needed a carrier since no Nigerian airline was flying more than four to six hours.

“As we speak, no airline is going to South Africa, North Africa, East Africa, not to talk of Europe and North America.

“There is none since Arik Air and Medview suspended their international operations.

“For me, it is a welcome development and I just pray that whatever model the government is adopting will be to the good of the industry,’’ he said.

According to him, the new national carrier, apart from filling the gap created by other domestic airlines, will also provide employment opportunities for Nigerians in the sector.

Ahmadu said: “It is going to provide jobs for pilots, engineers, cabin crews, and it will even up the business of the handling companies, the aviation catering companies, just to mention a few.

“It will also contribute to the Gross Domestic Product from the aviation sector.

“As you know, the bulk of the industry’s revenue comes from the foreign airlines and the aviation agencies such as the Federal Airports Authority of Nigeria, Nigerian Airspace Management Agency and the Nigerian Civil Aviation Authority.’’

However, the President of the Aviation Round Table (ART), Mr Gbenga Olowo, in a statement, said that there was need to know the procedures and processes being used in bringing back the new national carrier.

NCAA To Begin Fresh Audit Of Airpeace, Ibom Air, Others After Suspension Of Aero, Dana

How Jonathan, Buhari Drew Down Excess Crude Account From A Peak Of $20bn To $0.37m

According to him, ART has given its recommendations to the government on the way forward since Sept. 2015.

“Nonetheless, we have passed that stage now since Transaction Advisers have been appointed. The TA should now roll out the details for implementation.

“I wonder whose decision it is on choice of aircraft types, lease/purchase aircraft acquisition, partnership, etc, without a Board and Management.

“If the company were to be 100 per cent private sector, I hope government is not already placing the cat before the horse by taking such decisions,’’ Olowo said.

Also, Mr Ikechi Uko, a tourism and travel expert, said though the establishment of the new national carrier was commendable, the timing by the government was not appropriate.

Uko said : “We have all been clamouring for a new national carrier all these years, so it is commendable that the government is looking in this direction.

“However, I have always insisted that the timing is wrong because there are processes and procedures to be followed, but if they decide to fast track them, then the carrier can take off as scheduled.

“Also, people may view the move as being political, considering that we have a presidential election next year.

“So, for the airline to be a success, it must be devoid of politics and all Nigerians should see it as their own.

Another expert, Group Capt. John Ojikutu, said the government must be careful not to be too involved in the new national carrier, else it may go the way of the defunct Nigerian Airways.

“It will improve the national economy if it is well managed because out of about 70 bilateral air service agreements (BASAs), only about 30 are working.

“If we can set up a national carrier, not a government airline, we should be able to take advantage of these routes that are not utilised at the moment.

NCAA To Begin Fresh Audit Of Airpeace, Ibom Air, Others After Suspension Of Aero,…

How Jonathan, Buhari Drew Down Excess Crude Account From A Peak Of $20bn To $0.37m

‘You Know Nothing About Nigeria’— Atiku Hits Back At Sowore Over…