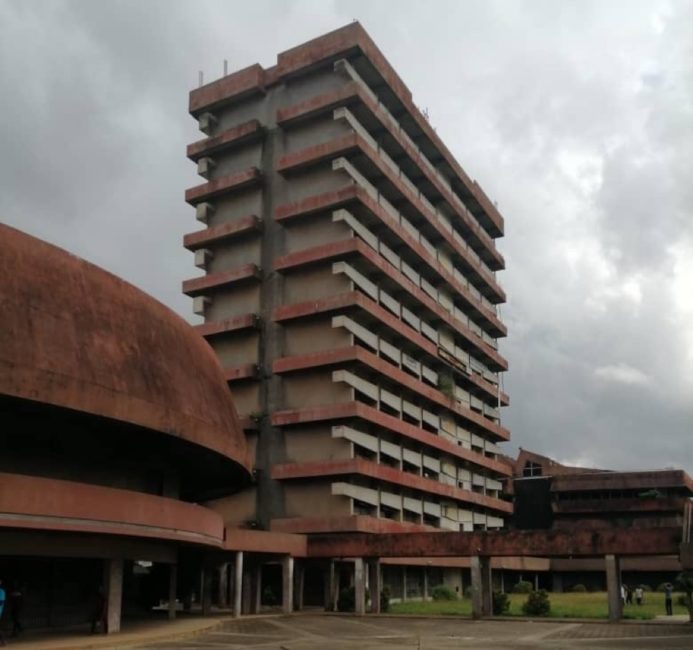 The multi-billion naira Agbowo Shopping Complex built about 40 years ago by Oyo State Government has gradually turned to a hideout for armed robbers and other criminal gangs troubling the area.

Residents of Ibadan, the Oyo State capital are agreed that the neglect of the 10-storey building by successive governments in the state is responsible for the massive rot in the place.

The shopping complex which is located directly in front of the University of Ibadan on the busy Ibadan-Oyo Expressway, is gradually becoming dilapidated.

The shopping complex reputed to be the first shopping mall in Ibadan, the city which is the epicentre of many firsts in the country, has very large office spaces, a cinema, and very spacious car parks

The edifice was said to be the brainchild of the then military governor of the Western Region of Nigeria, Major General David Jemibewon (retd.), who later became the governor of the old Oyo State. The shopping complex was reportedly inaugurated by President Muhammadu Buhari, who was then the military Head of State on October 22, 1984.

Our correspondent observed that some parts of the massive building have been taken over by shrubs while mentally unstable persons also inhabit some parts of it with open defecation causing the building to stink.

It was gathered that the efforts of late former Governor Abiola Ajimobi, to remodel and rehabilitate the building did not materialize and the same thing appears to be unfolding under the current administration.

Governor Seyi Makinde’s government awarded the remodeling and rehabilitation of the shopping complex to a contractor for N4.9bn in late 2020 but the contract was reportedly terminated.

Makinde had during the handover of the shopping complex to the new contractor said the previous administration of Ajimobi was to embark on the rehabilitation of the facility for N8bn but it never saw the light of the day.

The governor said, “What they could not do in eight years, we are doing in two years. By the grace of God, we will have this complex completed within our tenure. We have taken time to do our due diligence. The Oyo State Government will be working with Messers Whitestone Global Limited. Our collaboration will be in form of a long lease concession with a capital injection of N4.9bn.

“Their mandate is to convert this moribund structure into premium commercial real estate and a 4-star hotel. The long lease is for 50 years.”

But just like his predecessor who he criticized, the rehabilitation stopped even before proper work could start on the project. Residents expected that the pace of work would be fast but suddenly the work stopped and the edifice has been abandoned again.

The return of hoodlums to the building has made those living around Agbowo and other adjoining areas including students of the University of Ibadan to call on the Oyo State Government to quickly complete the project and return the shopping complex into a beehive of commercial activities.

Some of the residents who spoke to THE WHISTLER said most of the hoodlums constituting menace to the neighborhood normally hide inside the expansive complex.

Oluwole Aina, who has a shop around the shopping complex said, ” The state government came around 2020 and drove away those who rented office spaces at the complex and we were rejoicing that the place would be rehabilitated. But the shopping complex was abandoned again.

Revenue Loss: Customs CG Fires Back At SON, Says Agency “Incapable Of Living Up To…