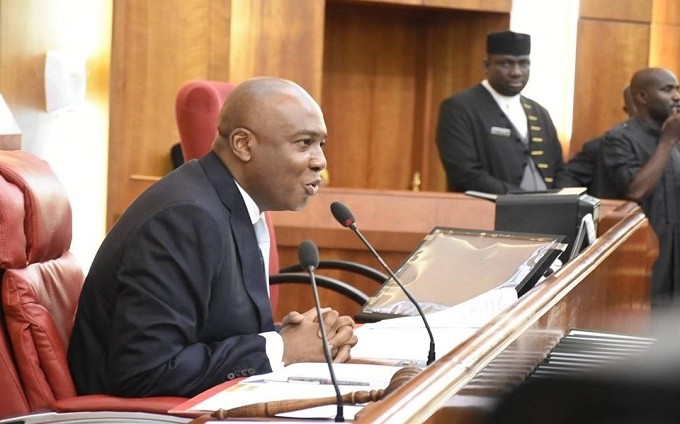 The Nigerian senate, on Thursday, confirmed Professor Mahmoud Yakubu as the new chairman of the Independent National Electoral Commission (INEC).

The senate also confirmed five commissioners, who had been nominated by President Muhammadu Buhari, as members of the INEC.

The INEC commissioners confirmed by the senate are:

Recall that the new INEC appointments were approved on October 21, 2015, at an emergency Council of State meeting held by Buhari.

Yakubu was chosen to replace Amina Zakari who is now the INEC Commissioner representing the North-West.

During his screening, Yakubu, a first class degree holder in History from the Ahmadu Bello University, Zaria, said his long term goal is to conduct a nation where Nigerians will vote seamlessly. He advocated for E-voting, saying it is desirable and inevitable. He however noted that the nation must tread cautiously as regards the use of the E-voting.

Yakubu said, “We have moved from Voter Registers to Photographs and Biometrics, we will eventually get to E-Voting System.”

On diaspora voting, Yakubu said it is worth trying. He however noted that there are elections reforms to be done.

Such reforms including the law demanding an electorate to vote only where they did their voters card registration.

“Fundamental reforms even constitutional amendment is needed to allow people in the diaspora to vote,” he added.

According to the new INEC chairman, early preparations for elections, is key to reducing logistics and other electoral problems in Nigeria.

“The success of any election depends on the ability of the commission to plan in advance.” he said.

On card reader, Yakubu, who is also a former Executive Secretary of the Education Trust Fund, said his predecessor, Professor Jega had a marvelous job, he however assured that he will consolidate on the successes of the 2015 elections, especially on the challenges faced.

He further assured that elections will be conducted as at when due during his tenure.

Professor Yakubu who pledged to ensure that INEC at the headquarters, state or Local government levels will not influence electoral process, pledged to work for the even distribution of Permanent Voters Card in all parts of the country.

“By this time next year, I’ll make sure the 12.3million PVCs that were not distributed, get to the owners before the next election.”

He said that during his tenure as INEC chairman, anyone who errs during any elections, will be sanctioned, adding that he cannot be intimidated in his discharge of duty.

Also, Antonio Taiye Okoosi Simbine, who is expected to be the INEC Commissioner for the North Central, during her screening, spoke on the need for INEC officials to be involved in election petitions matters.

She said, “If I’m confirmed as INEC commissioner, I would expect to operate as an unbiased Commissioner. I would also expect INEC to be unbiased & independent.”

On her own part, Amina Zakari who until now was the acting Chairman of INEC, said there is an urgent need for the introduction of technology to improve efficiency and transparency in the electoral process.

Zakari said: “We need to use more technologies to ensure efficiency and transparency in our election.

“The elections have been transparent but we need to do more to make them more transparent.”

INEC commissioner Mohammed Mustafa from Edo state, while making his presentation, said he is strongly involved in Civil Society Movement. He spoke on the Millenium Development Goals & how Nigeria is working towards achieving the goals peculiar to the country.

He however called for the continued use of card readers in elections.

He said, “Going forward, there are things we can do to improve the Electoral System.

“I see that dream of using Card Readers is Local Government Areas as a dream that can come to reality.

“The place of technology is irreversible, this is because technology enhances efficiency.”

During his presentation, INEC commissioner Soyebi Adedeji stressed that there is no election that is flawless in the world, adding that there is a need for some modifications in the use of card readers as well as the need for training and re-training of their staff.

“We would do more training and retraining of the operators of the card readers.”

“Technology is an important solution to delivery of election services. Flawless election can’t be possible manually.

“No election in this world is perfect. What can be done is to reduce the hiccups and ensure there’s transparency.

“Electronic Voting has been adopted in many countries because of the facilities they have there,” he said.

During his screening, Baba Shettima Afro from Borno state who is expected to be the INEC commissioner for North-east, was asked to take a bow after being asked a few questions.

Amaechi, 17 Others Confirmed As Ministers Of The Federal Republic Of Nigeria