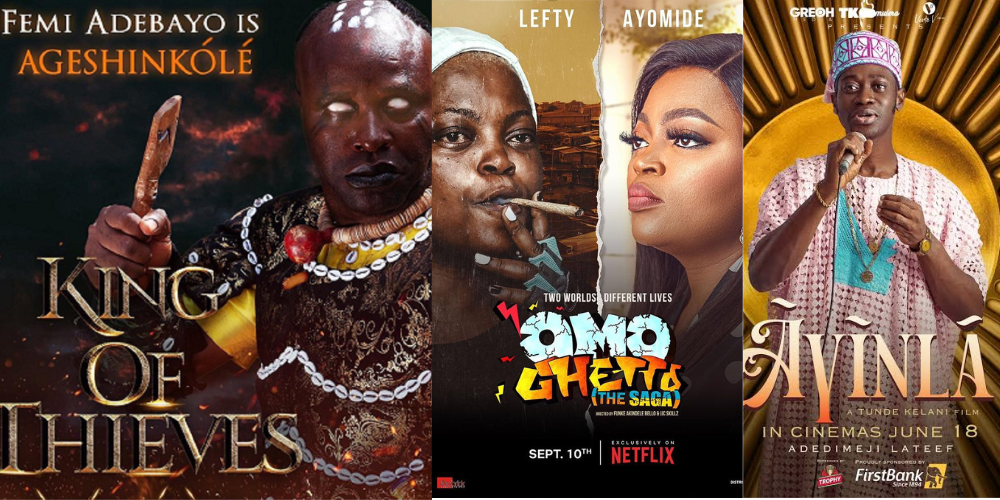 The time may be over when Nigerian movie producers make almost zero gain after producing blockbuster movies due to piracy and other malaise plaguing the industry. The Nollywood industry appears to have advanced in movie making, as 41 Nigerian films made N3,214,330,843 billion within two years and six months.

Though actors and producers may sing different tunes on the profitability of the industry, there’s no gainsaying that the movie business has risen to a high-profit margin within the last few years, with ideas, art, and creativity being put to work.

While there’s a lot of money to be made in the film industry, the economics of making movies are far from simple.

Nollywood movie directors have stated that to produce a good movie, takes a lot of capital. THE WHISTLER spoke to some Nollywood moviemakers who offered further insight into the business of movie-making.

Veteran movie director, Tunde Kelani revealed that the production budget for his movie ‘Ayinla’ was N41 million. So far, Ayinla has grossed more than N91 million and has since been acquired by the streaming giant, Netflix. It has been available for more than 2 months on the platform and this would likely increase the profit margin for the film.

Popular actor and producer, Femi Adebayo, refused to disclose what it cost to produce his movie, “King of Thieves,” he noted that it could cost as much as N50 to N100 million to produce a good quality movie.  The “King of Thieves” has grossed N315, 513, 250.

Major Nigerian studios do not disclose what it costs to make a movie, but there is no doubt that it costs a lot to make a good movie in this day and age taking into account the various elements that bring a film to life like the casting, filming, editing, marketing, advertisement, and so on.

While researching the highest-grossing Nigerian movies of all time, THE WHISTLER collated a list of the 41 most profitable movies released between 2020 and the second quarter of 2022. The 41 movies grossed a total of N 3,214,330,843 billion.

According to figures compiled by the National Bureau of Statistics (NBS), a total number of 2,599 movies were produced in 2020. But in 2021, the NBS only provided data for the first two quarters of the year, January to June, during which 1051 movies were made. There was no data provided for 2022.

Among the top movie-producing states, Lagos has the highest number of films produced.

Speaking during a telephone interview on what it takes to make a good movie, Kelani said, “It’s the story that will determine it. Once you know the story, the most important thing is to be careful with expenses, don’t spend money wastefully.

Explaining how much was spent to produce “Ayinla” and details of his expenditure heads, he said the cost was a combination of all elements that went into the production.

“We spent 41 million on it, and it was everything really that led to the total cost. The technology involved, like the cameras and others. Some of the cameras we used cost as much as N17 million. Then all the artists, the band members that performed, etc.”

However, Kelani said he does not consider ‘Ayinla’ to be one of the most expensive films because there are a lot of movies that cost much more than that to make.

Our Expectations For 2022– Celebrities

How Funke Akindele, AY, Five Others Earned N3.23bn From Nollywood

“ Some movies cost as much as 80 million to make. On average, people spend about 35-40 million naira to produce films,” he said.

“For example, the taxation I received for this ‘Ayinla’ movie was high, they first said the movie wouldn’t sell because it’s Yoruba. I was surprised when I heard this but I was determined to prove them wrong and they’ve now seen that Yoruba movies sell and they sell very well.”

“The regulatory bodies also have to make sure that the movies they approve are movies that are entertaining but will also generate profit,” he added.

On the other hand, Femi Adebayo who produced the second most profitable movie in Nigeria, “King of Thieves” which raked in more than N300 million, declined to reveal the budget of the film.

He said it was confidential, however, he noted that it could cost as much as 50 to 100 million naira to produce a good quality movie of his standard.

Adebayo added that although movie production in Nigeria could cost a lot of money, movies are also made for relatively cheap amounts of money all the time, depending on what standard the producer is aiming for.

However, veteran Nollywood actor, Emeka Ike, disagreed that Nollywood is profitable. Ike who spoke to THE WHISTLER said that based on the NBS data, many of the monies produced in the country are not doing well.

He said if more than 3650 films were made in the last three years and the most profitable films of the year add up to just 41, with a total gross of just above N3 billion, then the industry is not as profitable as it can be.

“The industry is supposed to be profitable but judging from the statistics, it’s actually diminishing. It could be because the producers are not making the amount of profit that they envisage before they go into the project, and when they don’t get the financial feedback of what they are expecting, this could discourage production.

“Let’s say you projected that if I make this movie with N15 million I could be able to make so and so amount, and in the end, you find out that it didn’t makeup to N5 million, so you are operating at a loss,” he said.

Ike added that aspiring movie makers looking in from the outside do not realize this and so they venture into the movie-making business with high hopes of profit-making only to be unpleasantly surprised by the reality.

“The next person who doesn’t know dives in, and like that people keep going into the business and getting a real shock because there is no balance between the cinema owners and the film producers”, he explained.

He said putting a price on what it costs to make a good movie is not so straightforward as it relies on different factors depending on the kind of movie being made.

“You don’t make a critical estimate of what determines a good movie, it’s the script. If it is written as an epic movie for example, then you would need a lot of epic tropes, and epic locations, and so on.

“Whereas, if it’s contemporary it depends on what the story is, the quality of production, and then the cast of course. I can’t say N20 million will make a good movie seeing as you could even make a movie with N4 or 3 million where you could just have 3 cast members and it ends up being great, it all depends on how you script the movie,” he said.

The veteran actor decried  the standard of movies that make it to cinemas nowadays, expressing his disapproval of the “rush to move to cinema.”  He said the “rush to jump into cinema movies as I said has always been the bane. People did not do it organically or build sequentially, there was a hype about cinemas that got the industry going that way and everybody now thinks it’s all about cinema.

“People who were not properly trained in the art of filmmaking get some money from BOI (the Bank of Industry) and they are just making movies that are very similar to ones we used to make before, but with better cameras. The movies are not focused, or directed by professionals unlike ours which had originality and important features like an origin, a focus, direction, and a destination.

“When we want to deliver a story to you; we take it from the root and we’ll tell it for your understanding,” he stated.

2023: How Nigerians Will Get Their PVCs In November, December – INEC